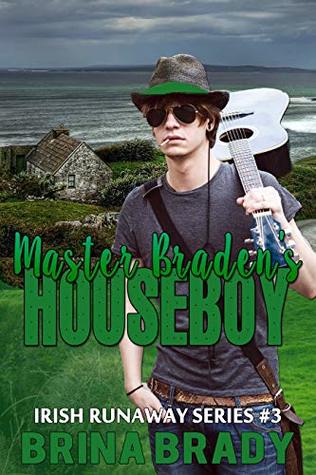 Reece was a guitar player and a singer at his grandfather’s pub in Dublin until someone betrays his secret. Once he was a happy and carefree young man, who finds himself on the streets and homeless.
He meets a handsome stranger, who gives him hope that the world still has people with compassion, until he discovers the man may have compassion, but he is no softie. Conner hires Reece as his houseboy.
Much to his shock, Conner Braden isn’t only a garda (Irish police officer), but he is also a Dom! The two men are complete opposites, but that doesn’t stop Reece from wanting to win his heart.
What happens when Master Braden blurs the lines between employer and Dom when Reece is his employee?
AUTHOR’S NOTE: This book contains mild BDSM elements including restraints, blindfolds, and spanking. While the story uses characters from The Irish Runaway Series, you can read this book as a standalone.

Reece has left his hometown to start over. His dad found out he was gay and kicked him out. Reece also left his last Dom because he wants a Dom to himself and Master James only trained subs so that they were ready for a permanent Dom. Reece doesn’t like sharing, so he left everything behind. The problem was that he’s homeless and it’s been raining. He’s sleeping under a box when someone kicks his box off of him.

Connor sees a box in the park and kicks it and is surprised by the most adorable face he’s ever seen. He immediately wants to help this young man and takes him to lunch. Connor decides he needs Reece to work for him as his houseboy. Connor hasn’t had a permanent sub since Patrick left him a year ago. He just has weekend subs, and that’s worked for him.

Reece has trouble following the house rules from day one where he and Finney go into his playroom after being told not to. Connor is most upset about this because he wanted to show Reece his playroom himself. Reece has awakened Master Braden’s need to Dom Reece but isn’t sure he’s ready. At least not until another Dom shows interest in Reece. He literally removes his belt and collars Reece right in the restaurant. Reece couldn’t be any happier except he wonders if he will be enough for Master Braden.

When Patrick shows up back in town, Master Braden isn’t sure how to feel. Patrick makes Reece believe that Connor is going to collar him again and that Reece will have to share until he finds Reece another Dom. Reece leaves because he wants Master Braden to himself. Will Master Braden find Reece in time to tell him he loves him and not Patrick? Will Reece ever have his own Dom and be able to trust one? Will either of these two have their happily ever after? I hope you enjoy as much as I did.

One thought on “Review: “Master Braden’s Houseboy” by Brina Brady”