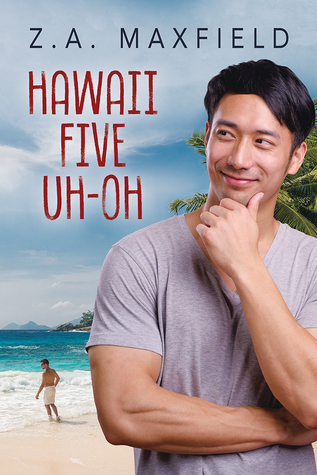 Sarcastic cop Theo Hsu returns home to Hawai’i after realizing he wants more from his life… and also less. He hopes to reconnect with his past and make amends with his mother, who’s remarried to a cool, distant man, leaving Theo unsure where he stands.
It doesn’t take him long to figure out where he wants to stand, though: right next to his childhood best friend, tattooed detective Koa Palapiti. Theo would like to upgrade their relationship, but Koa is putting out some seriously mixed signals. It’s a mystery Theo can’t let go, but just as they start to connect, kidnapping, murder, and a deadly game with international stakes get in the way. Koa wants to keep Theo out of it, and if it comes to a choice between him and Koa’s partner, Freddie Ortiz, Theo doesn’t like his chances.
But even if Koa wants to push him out of the investigation, and his life, Theo still has a few tricks up his sleeve. It’ll take all his special gifts, ingenuity, risk-taking, family ties—and even some kinky undercover work—to save the day… and the man he never should’ve let get away.

Koa Palapiti is a dark, tattooed intense detective. With his best friend and partner Freddie Ortiz, they are the hot bad boys of the precinct. But Koa seems to have a lot of secrets and sends a lot of mixed signals to Theo.
Theo doesn’t know what to do? Can he pursue his dream to be with the man he loves? Does he have to move the past behind him and go on with his present? That’s what he’ll have to find out.

Hawaii Five Uh-Oh by Z.A Maxfield is book two in the Plummet to Soar series, but it can be read as a standalone.
I was happy to read this book, and I enjoyed a lot Plummet to Soar (https://optimumm.blog/2018/05/08/review-plummet-to-soar-by-z-a-maxfield/) where I met Theo the first time.

Theo Hsu is a cop, and after twenty years on the mainland, he’s come back to Hawaii. Theo is disconnected from his island, his people, his family. He walks on eggshells around his mother, his step-father, and his new colleagues. He tries to forget his past and move on with his present, like a good plummetee, but it’s easier said than done. Everything gets complicated when he reconnects with Koa, his childhood best friend and first love. Koa is trouble, with a big T. Something is wrong with him, and Theo knows it, but he doesn’t know how to help him, and Koa sends him a lot of mixed signasl, like a looooooooooot.

I adored Theo. I completely melted for him. He’s funny with a little tendency for craziness, but he’s also very smart and kind with a good heart. Even if he has a lot of doubt about Koa, he doesn’t give up on him, and until the last minute, the last moment, Theo tries to save them, to save their relationship and maybe their future. I really adored him, he’s so funny and smoking hot especially with Koa.

The story was told from only Theo point of view. We make this journey with him between his past and present. In my opinion, there were two plots. The first one is about how Theo can reconnect with his past and make up for the lost time. The second one focuses on Theo and Koa’s relationship and Koa’s secrets. The author was brilliant with her writing because through all the books we alternated between plot 1 and plot 2 until she makes them merge. It was very well done.

If you want to read a good contemporary romance, with suspense, mystery cops, some dirty secrets with kinky-crazy situations like only Z.A Maxfield can do, Hawaii Five Uh-Oh is for you.
I gladly recommend this book, it was fun, kinky and fresh.

4 OptimuMM’s for Te and Woody