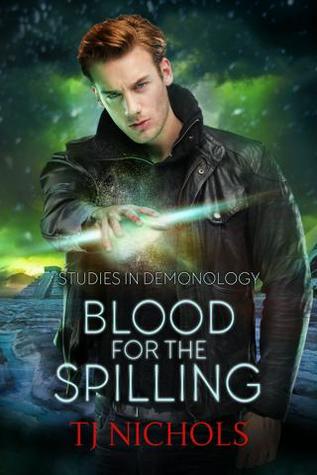 Sheets of ice are spreading across the human world, ushering in an ice age as the magic drained from Demonside turns that world into a desert. Angus and reluctant warlock Terrance have defected from Vinland to the Mayan Empire—a land of dark and potent magic. But the Mayans aren’t offering sanctuary for free.
Nor is the world willing to stand back as Vinland attacks, and the backlash will affect all magic users.
Mage Saka has no tribe. He is now just another refugee fleeing the dying Demonside. He knows the conflict brewing now will be worse than the first demon war. Countries are banding together—not just against Vinland, but against all magic. Where will the powerful Mayan Empire stand?
Angus might have the power to fight Vinland and the Warlock College, but the cost will be terrible. Saka is torn between helping Angus and stopping him. And Terrance would do anything for Angus, but he’s terrified of the man Angus is becoming, even as Saka is warming to the idea of a relationship between the three of them.
No matter what choice they make, victory will be bittersweet, and when the ash settles and the snow melts, nothing will be the same.

Angus, Saka and Terrance finally arrived at the Mayans Empire, but they don’t find the shelter and help they were hoping for.
The whole “human” world is at the edge of a war, while demonside is at the edge of extinction.
Saka tries to convince other demon mages to close the doors between these two worlds to gain time while Angus tries to find a way to save both worlds. He might have a way, but it will cost blood, love, and life.
Can they take the risks? Can they choose to lose everything to save their world? No matter the end, blood will be spilled.
Blood for the Spilling by TJ Nichols is the third and last book of the Studies in Demonology trilogy.

I was thrilled to read the last chapter of Angus, Saka and Terrance’s journey, and TJ Nichols didn’t disappoint me. This final was fabulous, and I was completely hooked in the book.

Angus wants to save his world and demonside. He’s ready to do everything in his power for that, but the Mayans Empire isn’t as welcoming as he’d hoped, and after everything he endured in Vinland, after almost dying in the demonside’s desert, Angus has to prove himself again while finding a way to save them all.

Saka is as desperate as Angus to save the world, his world. He keeps trying to reach other tribes and find a way to united them to save their world, meanwhile, he wants to protect Angus, to save him too. Saka is torn between his duty for his people and his love for his Mage.
Terrance hopes to finally find a home, to finally be able to be with the man he loves even if he has to share him with Saka. But Terrance’s past with Vinland—what they forced him to do to Angus—comes back to bit him, and the Mayans see him as a traitor, as someone who can’t be trusted, and they threaten his life and his future with Angus.

Throughout the book, we follow Terrance, Saka, and Angus on their last journey. The point of view alternates between the three of them. The sacrifices they are forced to do, their fears, their doubts and most of all their love. This book is the final chapter, and it’s the darkest of the trilogy in my opinion. The atmosphere is dark and heavy, I felt the fears and the angst, I felt their despair, I felt their love. I was completely hooked in the book and couldn’t put it down until the end.

This final episode is my favorite in the series, and the end was epic.

I highly recommend this book and the entire series. if you haven’t read it yet…Angus, Saka, and Terrance worth it.

It’s 5 OptimuMM for The Mages and their anchor.