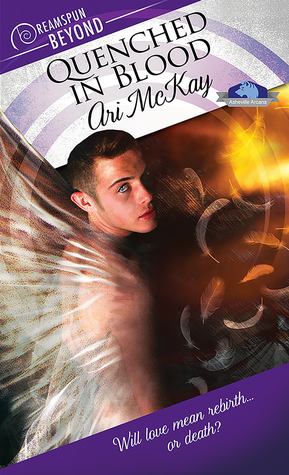 Will love mean rebirth… or death?
Vampire Julian Schaden has been warning the Asheville Paranormal Council of an impending demonic incursion for more than two decades. Over the past two years, he and his friends have fought as hard as they can with little help, since Micah Carter, the demon hunter who should have led them, shirked his responsibility and then perished.
Desperate for anything that might aid the fight, Julian enters the Carter property and finds something he never dared hope for: young Thomas Carter, the heir to a long line of demon hunters.
Thomas knows nothing about the supernatural world. But the prospect of a real life, outside the sheltered, isolated farm where he grew up, calls to him, and the idea of fighting the Unholy feels right.
Julian agrees to train Thomas even as he struggles against an unexpected, unwanted attraction. Thomas is too young and innocent to get involved with Julian, but opposites attract, and this is one battle Julian seems fated to lose. A prophecy from a dying mage comes with a bleak warning: the upcoming battle will claim Thomas’s life. To keep his home and friends safe, Julian may have to sacrifice the only love he’s ever known.

Julian Schaden is a reclusive three-hundred-year-old vampire and a member of the Asheville paranormal council. For the last two years, with his two best friends, Arden and Whimsy and their mates, Eli and Harlan, they fight against evil forces who want to bring a powerful demon to earth.

Thomas Carter is the last heir of a long line of demon hunters, but he doesn’t know that. He was raised by his grandfather, Micah, a demon hunter too, who had to hide the truth to Thomas. Micah raised him on an isolated farm, without friends, TV, Internet…nothing. Thomas was completely cut off from the outside world.

Julian agreed to train Thomas and to teach him everything about the paranormal world and his legacy. Thomas is eager to learn with Julian, and not only about his destiny. But when a prophecy reveals that Thomas must die in order to save the world, Julian will have to choose between the world’s safety or his only real chance of love.

Quenched in Blood by Ari McKay is the third and final book in the Asheville Arcana series.
Julian is a vampire—a broody vampire. He’s fought against the evil forces for centuries now, and with the help of his two best friends and former lovers, Arden and Whimsy, Julian tries to protect the world. He has a lot of guilt in him, and he blames himself for Thomas’ parents and grandfather’s deaths, that’s why he tries to trained him to be the best.

Thomas is eager to discover the world or the worlds around him—the human world and paranormal world. He’d lived sheltered from the outside all his life, and he has a lot to discover. He also wants Julian, not only as a mentor, but also as a lover. He’s young, but eager to learn, he’s brave and kind and accepts his destiny even if it’s terrifying.

I loved these two characters. Julian is the archetype of the broody, moody vampire who reveals himself only to the people he cares about. He can be technically undead, but he’s more human than what people think. He’s strong, brave, fierce but also sensitive, kind and very smart, I loved that about him. Thomas is young but not stupid. He takes his duty as demon hunter seriously, and he’s also brave and doesn’t hesitate to speak his mind when necessary. I liked that he wasn’t a little puppy following and obeying his master.

This book is the last one in the Asheville Arcana Trilogy. We finally know who the demon is, how they’re going to fight it, and if they’ll survive. It was captivating, and I was a little bit sad to have to say goodbye to them.
I had a great time with them, and this final episode was super good.

4 OptimuMM’s for the Vampire and his angel.