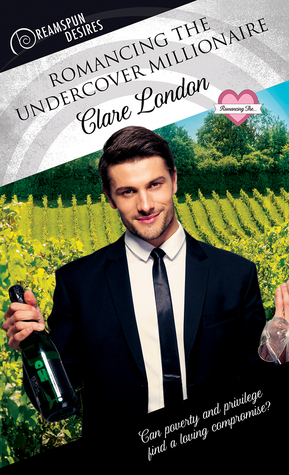 Can poverty and privilege find a loving compromise?
Alexandre Bonfils, a rich and spoiled second son, is tired of being ignored and decides to help when the family’s exclusive wine business is in trouble. Going undercover in the warehouse, he loves the adventure—and the chance to be close to the sassy and sexy manager, Tate Somerton.
Tate is hardworking and financially struggling, bringing up his siblings on his own. A suspected saboteur at work is his latest challenge, but now he also has a clueless, though very attractive, new intern. There’s an immediate spark between the ill-matched couple, until a shocking accident cuts short Alex’s amateur sleuthing.
While recovering in the generous care of Tate and his family, will Alex realize what belonging really means? Passion and pride come together to fight for the company they’re both committed to preserving, but can a personal bond remain when the dust settles?

Alexandre Bonfils is one of the heirs of Bonfils Bibendum, a prestige Wine family business. Alex isn’t as imbedded in the family business as his older brother, Henry, and his father, Charles, and both had decided to fire him (kind of) until Alex finds his own path. When Alex hears there’s some problem in one of the warehouses, he has the crazy idea to go undercover there and investigate the sabotaging.

Tate Somerton is the manager of the warehouse. He struggles between his job and his three little brothers and sisters and his grandma. He doesn’t have time to find love in his crazy life and surely not now with all the problems he has at the warehouse.
Alex expects to come to Bristol to find who is the saboteur and to go back to London like the prodigal son. He doesn’t expect Tate and his family, and he doesn’t expect to completely melt for the sexy manager and his circus family.

Can they have a happy ending despite their differences?
Romancing the Undercover Millionaire by Clare London was a sweet, adorable and fun read.
Alexandre is a diva; he was sheltered all his life. Born in a wealthy family, he never has to think about money or even find a job. He’s an heir of Charles Bonfils after all, but when his father kind of fired him, Alex realized he has to prove himself to his family. That’s why he had the crazy idea to investigate the sabotaging at their warehouse in Bristol and to go there undercover.

Tate Somerton is the manager of Bonfils & Bibendum’s warehouse at Bristol, and he’s the legal guardian of his three brothers and sisters. Even with his Gran and his BFF Louise help, Tate doesn’t have time for himself. Until he meets Alex.

I completely melted for those two guys. Alex is my favorite, a real diva, funny, sassy with a big heart. He’s disconnected from Tate’s reality (some situations are hilarious), but he adapted himself really fast and took the family as his own. Tate is more temperate and quieter, being the parent of 3 kids forced him to grow up and to take on maturity sooner than others. I loved how one is the balance of the other. How together they find the perfect equilibrium in their life and temper, and mostly I loved how, despite the appearances, they are more in tune and similar than what we think at first.

Clare London wrote a sweet and funny love story with a captivating plot. Indeed, between Alex and Tate’s love story, there’s also all the investigation parts about the sabotaging that give a good dynamic to the book.

I gladly recommend this book. It’s a beautiful, sweet and funny read that you can consume near a fire with a hot cocoa.

4 OptimuMM’s for the H’s, Amy and Freddie.