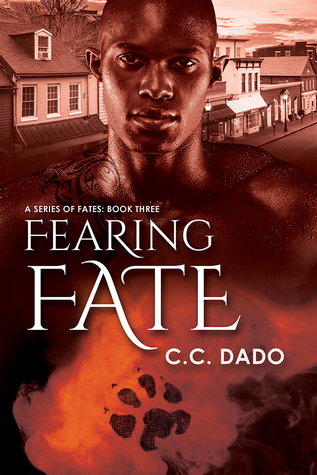 He is a fearless protector by nature and in his heart. But nothing’s ever simple with love… or fate.
At nearly seven feet tall, Zeus’s role had always been to protect the pack—but his newest charges need him more than most. Kimber and Kron are transplants from another pack, and they have a dangerous stranger on their tails. Zeus is determined to do his duty and drive the human out of town. But when he confronts Toren, his wolf has other ideas….
Something isn’t right, but should a huge, tattooed wolf with a secret soft heart fear his fate—to love a man with secrets of his own?

Fearing Fate is the third book in the A Series of Fate series by C.C. Dado. I really like this series. I like that each book is about a different member of the pack finding their fated mate but that you get to see how the other mates are doing also, and there is a secondary story arc that ties all of the books together. I liked this book just as much as the previous two. It was just as fun to read although it was a little bit shorter than the other two books.

I have been waiting for Zeus’s book since the first book. He’s put up with a lot from both Max and Seth, especially when Seth made him believe that Max was a special type of Omega who could get pregnant and that he was expecting. It was a lie, but it was a really good lie that poor Zeus believed completely, and Max milked it for all it was worth before finally having to confess that he wasn’t pregnant.
So when Max tells him that they are going to be fostering two kids from another pack, who thinks that their parents may have been killed and is having issues of their own, Zeus makes a vow to do everything in his power to keep the pack safe. It is after all his job as the alpha’s second and enforcer. So when he catches sight of a stranger on the security cameras around town, he’s determined to find him and kick him out of town. He didn’t expect that the stranger would be his mate. Or that his mate was sent to different towns to locate two missing kids.

I also liked how Zeus had a magical touch with the 6-month-old baby boy they are fostering. He could instantly make the baby stop crying and get him to sleep. It was also great to see a different side of Max from the hyper upbeat character that we have seen in the last two books. He’s out of his element with baby Kron and doesn’t understand why his natural calming ability as an omega isn’t working on the baby. Without Zeus, Max probably would have had a nervous breakdown.

I liked Toren. There is a lot of mystery around him and what he is, but he has a heart of gold and is a good fit for Zeus. All he could think about was saving his family farm which is why he’s looking for the kids for the guy who gave him the list. Once he sees the kids in person, he knows that he can’t contact the guy because he knows that he’s going to hurt them. So when Zeus finds him, he’s more than willing to give him any info and help that he needs.

I really liked this book, and I can’t wait for the next book to come out to find out what is going to happen to the pack next.