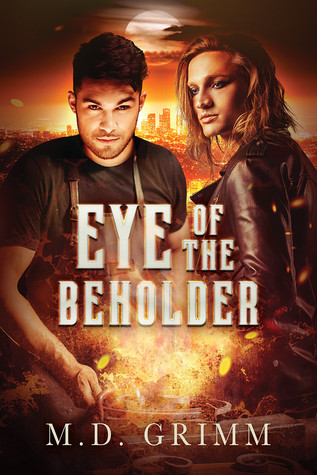 Is it better to risk it all… or never know what could have been?
After surviving an abusive childhood, Vulcan remade himself upon arriving in Los Angeles, California. He became a blacksmith for the paranormal community and strives to earn the respect of the vampire covens and werewolf packs that call LA home. He also prevents the pain of loss by keeping everyone at arm’s length.
But he never planned on meeting a former Roman soldier by the name of Marcus Cassius Vespillo. Something sparks between them and turns into a friendship he never considered possible. He can’t deny his intense attraction to the intelligent, courteous, ancient vampire. And it scares him.
Though Vulcan is wary of seeking more with Cassius, an attack leaves him at death’s door and forces him to reexamine his priorities. But Cassius has his own secret, one that promises tragedy and loss. And if that wasn’t enough, a slayer arrives in the States, one with a bloody connection to Cassius… and Vulcan himself.

Vulcan is a human. He survived an abusive childhood and lived on the streets before meeting Dain, a blacksmith for the paranormal community of L.A., and becoming Dain’s apprentice.
Cassius is a Vampire, a former Roman Soldier. He’s one of the oldest vampires in the world, he was a part of the history, and he lived through it.
Vulcan and Cassius have a strong friendship shared by their love for history. The alchemy between them is strong, and it’s up to them to take the last step to become more than friends. It could be possible, but they will first have to fight their fears and pasts before starting a future together.

Eye of the Beholder by M.D Grimm is my first book by this author and won’t be my last.

Vulcan is a human, and he’s a blacksmith for the paranormal community after the death of his mentor, Dain. Vulcan knows about the paranormal world, he has a strong friendship with the Duchesse, a powerful vampire (kind of a Vampire Queen) but that doesn’t mean that Vulcan trusts the vampires and the werewolves completely. Meeting Cassius was a surprise for him, and he was at first excited to talk with someone who was “alive” during all the eras of humanity’s history. But, Vulcan wasn’t ready to developed feelings for Cassius, and it scared him. I liked Vulcan. He’s smart, sensitive and strong. He’s also traumatized by his childhood and wears the scars in his heart and soul. I liked him and his possessiveness towards Cassius.

Cassius is a Vampire born during the Roman Empire. He’s as old as the world, almost. He saw and lived through everything, but he didn’t expect to meet someone like Vulcan. The young man caught his eye and his heart, and Cassius takes his time to woo Vulcan. I adored Cassius, adored his old-fashion way, his humor and his protectiveness toward Vulcan. He’s territorial and merciless when it comes to his mate. I completely melted for him.

The book was good, the plot interesting and divided in two. The main plot and focus of the book were about Cassius and Vulcan relationship; the sub-plot was about their dangerous world with enemies actual or past. It was interesting, well written, and the last part full of action.

I had a great time with them and enjoyed my read.

4 OptimuMM for The blacksmith and his vampire!