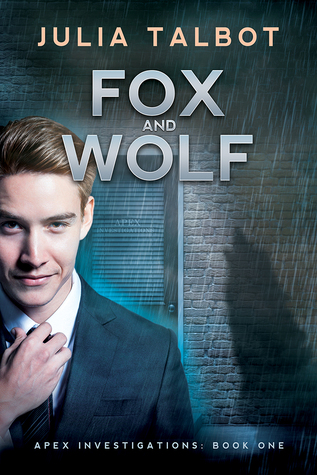 Werewolf PI Dylan Weems is a hired to solve the murder of a client’s customer. As an ex-cop, Dylan is the perfect man for the job, but he doesn’t expect the complication of alluring fox shifter Rey.
Ever since finding the dead body of one of his clients, Rey Mercier’s life is a mess, and he needs help desperately. He has no idea why he’s the target of some ruthless people or what he did to anger them. Hopefully Dylan and his motley crew of shifters at Apex Investigations can help him find out, but first Dylan and Rey have to deal with literal corporate tigers and dire crocodiles shifters… all while deciding what to do about the mate bond that’s becoming undeniable. And is that even possible between fox and wolf?

Dylan is PI at the Apex Investigations. As a former cop and a werewolf, he’s good at his job, but he didn’t expect Rey, the sexy fox shifter.

Rey is desperate and scared when he crosses Apex Investigations door. His client had been murdered, and his life threatened. Dylan is the PI in charge of his case, but Rey may find more than peace and safety with him.

Fox and Wolf by Julia Talbot is book one of the Apex Investigations.
I’m going to be very honest (like usual), I disliked the book. It was too confusing, the characters barely developed, and the plot full of holes and inconsistency. I was disappointed in the book.

Dylan and Rey are sweet and could have been wonderful, but the author completely missed them, and I found them empty instead.
The writing was confusing, the author tried to alternate between too much POV, and at the end, I didn’t know who was thinking what or who was talking to who.

I’m disappointed because it wasn’t my first book by Julia Talbot and I adored the ones I’ve read, but here she completely missed her mark.