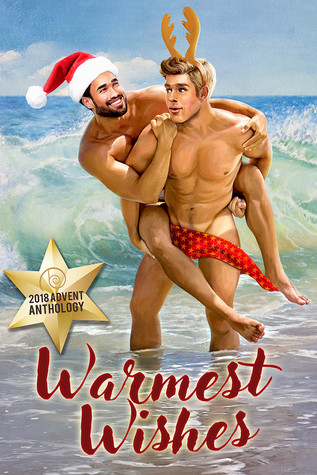 Celebrating the end-of-year holidays doesn’t always mean sleighs, snow, and snuggling to ward off the cold. How about making merry when it’s just as warm (or hot) outside as inside romantic hearts? Twinkle lights in palm trees, unity cups on the sideboard, bonfires in the backyard, eggnog by the pool, and no chimneys to be found… just the warmest wishes of the holidays bringing lovers together around the world.
A huge part of the world celebrates end-of-the-year holidays that aren’t anything like Bing Crosby’s “White Christmas.” In the southern hemisphere, it’s not even winter!
Holiday reading fun! A story delivered automatically to your bookshelf each day in December. More than 400,000 words of romantic fiction in 31 stories.
Stories will be available individually or as a package.
NOTE: Dreamspinner Press regrets to announce that one of the novellas included in the 2018 Advent Calendar package, Warren’s Peace by Emjay Haze, was previously published as a short story. It was thoroughly revised and expanded as part of its inclusion in the Advent Calendar. We acknowledge that our readers expect new content as part of this package, and accordingly we have lowered the full package set price, with the novella still included as a bonus. We apologize for the inconvenience.

I picked three of the short stories to read, and I did pretty well on my picks. I picked one that had no heat to it, the second one had a moderate amount of heat, and the third book was very hot. I always enjoy reading the Christmas short stories from Dreamspinner press. They put me in the holiday cheer and put me in a good mood. I read Purrfect Holiday by Jana Denardo, Slow Summer Heat by Renae Kaye, and Season to Shimmer by Kim Katil.

Purrfect Holiday by Jana Denardo.
Blurb: Tony Gatti had his life planned: get his veterinarian license and go to work with his dad and uncle. Soon after achieving his goals, he learned the shadows and blurriness in his vision went beyond needing glasses. Retinitis pigmentosa is a genetic mutation with no cure. With his sight almost gone, he moves into his grandmother’s St. Augustine, Florida, home with his guide dog, Raven, to start life over. Nonna Concetta thinks she knows the perfect job for him. Her vet is looking for someone to destress the cats at a local rescue. Javier didn’t plan to hire a cute former veterinarian to fill the role of cat cuddler, but Tony couldn’t be more perfect. Worried his attraction is inappropriate and knowing the holiday season always depresses him, Javier wonders if he should ask Tony out, or if he’d just be spreading the gloom to someone who already has enough of his own. But if he takes the plunge, could it turn out to be the best holiday ever?
This was a cute short story. I’m such an animal lover that I really enjoyed how Tony was able to turn his life in a different direction when he found out that he was losing his sight and got a job as a cat cuddler instead of being a veterinarian. The story doesn’t have any on-page sex, but there is some great chemistry between Tony and Javier. Great holiday cheer.

Slow Summer Heat by Renae Kaye.
Blurb: Geoffrey Saxon is in his forties, a bit plump, a lot fuzzy, and rather boring in bed—and thanks to a very public breakup, everyone in his street knows it. However, what they don’t know is that Geoffrey sometimes watches his hot young neighbor, Vaughn, in the pool. Vaughn has invited Geoffrey to join his pool parties, but Geoffrey knows it’s only pity. As if things can’t get worse, Geoffrey’s air conditioner breaks during a heat wave in Western Australia—and just before Christmas. In search of some relief, he camps out in his backyard, where he also has a prime view of Vaughn swimming…naked. When Geoffrey’s injured falling from his spying post, Vaughn comes to his rescue and Geoffrey doesn’t think he can be more horrified. But he could be in for a sweet holiday surprise. Is he ready to take the dive?
This was another cute story. It had me laughing over some of the things that happened in the book. Geoffrey and Vaughn had great chemistry, and because of Geoffrey’s insecurities, they are taking things slow sexually in their new relationship. I will definitely be reading more books by Ranae Kaye.

Season to Shimmer by Kim Katil.
Blurb: One morning close to the holidays, Nolan wakes up to two surprises: a distress call from his younger brother and a beautiful man in his bed. Nolan, an art gallery owner, has always been discreet about his sexuality, but when his baby brother plans to come out at the annual family gala, Nolan wants to have his back—and that means showing up with a man of his own on his arm. Nolan knows just the man for the job. Skylar, who owns a karate studio in St. Augustine, can’t get his one-night stand out of his mind. When he runs into Nolan at his gallery, he is more than happy to volunteer his services as arm candy. Out-and-proud himself with his striking blue/ green hair, Skylar is all in. Their adventure means a fancy salon, family drama, lots of sex, a ninja hippo, and palm trees lit up in a very suggestive way. By the end of it, what started as a hookup might become much more.

I loved this short story. It had everything that I was hoping for when I read the blurb. It has a heat level of 5 mixed in with some family drama and Christmas cheer. The story had great flow, and I loved the author’s writing style. The characters had depth and were very lovable. I will definitely be checking out more books by Kim Katil