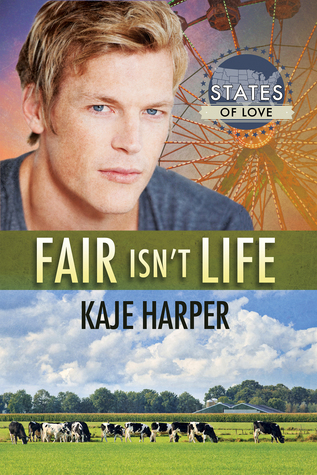 Luke Lafontaine survived the past year by not thinking about the father he lost, the dairy farm he couldn’t save from bankruptcy, or his way of life that vanished with the rap of an auctioneer’s hammer. Cleaning up city folks’ trash at the Minnesota State Fair is just another dead-end job. But at the Fair, surrounded by a celebration of farm life, ambitions he’d given up on and buried deep start to revive. And seeing Mason Bell in the parade—gorgeous, gay, out-of-his-league Mason—stirs other buried dreams.
Mason left his hometown for college in Minneapolis without looking back. Student life is fun, classes are great, gay guys are easy to find, but it’s all a bit superficial. He’s at the State Fair parade route with his band when he realizes a scruffy maintenance worker is Luke, his secret high school crush. Luke should be safely home working on his dad’s farm, not picking up litter. Mason wishes he hadn’t fallen out of touch. He’s an optimist, though, and it’s never too late for second chances. Now he just has to convince Luke.

Luke Lafontaine has lost everything, his father who’s died from cancer, his dairy farm that had been taken by the creditors, so basically everything in his life. He barely survives, can barely eat and he finds himself near homeless if he doesn’t find a new job soon.
Mason is a student in psychology, he lives in a house near the campus with his roommates and plays clarinet in the university’s band. Mason was also Luke’s tutor when they were in high school.
When Mason meets Luke again a couple of years after high school, he wants to reconnect with him and more, but Luke’s past, fears, and broken life aren’t simple to deal with.
Mason will have to help Luke to find his feet again, his life and maybe love.
Fair isn’t life by Kaje Harper is a standalone in the State of Love Series. It was my first book by this author, and I can say that I completely loved it.

I don’t know where to begin. I really loved this book. It was a beautiful love story. The characters are awesome, simple and real.
Luke is broken, in everything sense of the word. He has no money, no job, and he’s traumatized by his father’s death and the bankruptcy of his dairy farm. When he reconnects with Mason, he’s torn between his desires to be with Mason and not being able to be what Mason deserves. Luke is confused and scared, but he’s also a proud man, with values, respect, and kindness. I completely melted for him, from the very first words of the book, Luke touched me, touched my heart. He’s so beautiful inside and out, so sensitive and tired by all the trials of his life that I only wanted to hug him and never let him go.

Mason is the exact opposite of Luke. He’s out and proud (not that Luke wasn’t) and doesn’t care about what people can think of him. When he reconnects with Luke, Mason wants to explore the crush he had for him during high school, but when he realizes how hard life was for Luke, Mason does everything in his power to help and support him. I loved Mason, I loved how he is with Luke, how he helps him to figure out his life, how he supports him and how he takes care of him.

Those two characters stole my heart. I also loved all the oppositions between Mason and Luke. One is small, lean and feminine, the other is tall, huge and manly. One is dominant, the other more submissive. One is confident, the other fragile. But the two together are two halves of the same heart.

The author wrote a beautiful love story, simple and real, well written and beautifully told. She shows a piece of life, plain and simple.
I happily recommend this book. Really, you won’t regret it, and Mason and Luke are worth it.
It’s 5 OptimuMM’s for The Clarinetist and His Cowboy