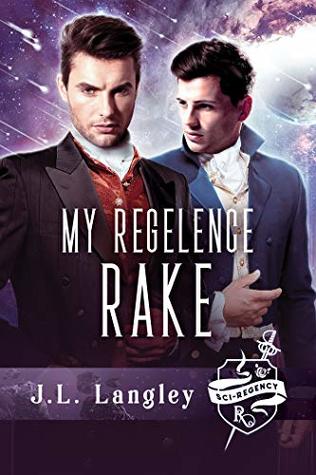 A Sci-Regency Novel: sequel to The Englor Affair
Sebastian Hastings, Viscount Wentworth, is captain of the Royal Guard by day and scandalous rake by night. To protect the royal family of Regelence from the plots of the Intergalactic Navy, Sebastian makes it his priority to personally oversee their safety.
Prince Colton Townsend is done pining after the roguish viscount and focuses his attention on his second love—horses. Following his dream of owning a racehorse breeding farm distracts Colton from his heartache… until Sebastian begins shadowing him.
When a good deed at a horse auction sparks public rumors, Colton just might get the man and the marriage he’s longed for. But Sebastian’s duties and secrets keep him walled off from those who would get close.
To reach Sebastian, Colton takes one last risk that might break his heart….

As I told you before, this is one of my favorite series. I will not repeat myself, as you can read in my previous review, so let it be enough that this series brings back good memories, memories I will never forget.

We continue with the story of Prince Colton and Captain of the Guards Sebastian the Viscount of Wentworth. We learn that Colton has had a serious crush on Wentworth since he was 13 years old, but it seems that he’s ignored by the Captain.

Sebastian has quite a reputation. He’s not as suitable as a chaperon as it seemed. He’s widowed and he will never marry again. His days are filled protecting the royals, and his nights are filled with games and paramours. When Colton, the poor bastard, witnesses one of the infamous viscount’s romantic escapades, he realizes, with heartbreak that it’s time to move on.
Suffice it to say, when the next day Colton ignores Sebastian, suddenly the tables are turned. Sebastian’s not used the cold shoulder from Colton and that intrigues him.

Then it comes to Colton’s father, King Steven, who we learn is a matchmaker. I love this book, particularly because we get glimpses into the King and his Consort’s life. The burning love for each other and the King’s mischievous ideas regarding his son Colton and The Captain of the Royal Guard.

But then not everything goes smoothly. As Colton plans to open his barn, turning his love of horses to his life mission now that he has moved on from Sebastian, and Sebastian’s past that threatens both their lives, we will not have one dull moment.

And now…I hope, from the bottom of my heart that this series doesn’t stop here! We need to find out what’s going on with the IN, and we defiantly need to read Rexley’s and Trouble’s story as well!!!