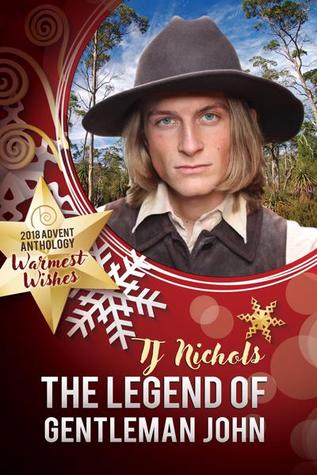 A Story from the Warmest Wishes: Dreamspinner Press 2018 Advent Calendar
Banyn, a fae, escorts the souls of children to Magh Meall, but one Christmas, he comes for a lad who isn’t quite dead, and he breaks a rule rather than wait while John fights a battle he’ll ultimately lose. So begins a long-running affair that crosses the border between life and death, the human and fae realms, and even oceans to strange countries with different gods and rules.
John Rourke renounced a religion that had no place for him and returned to the old ways. Convicted of theft, he is sentenced to transportation and suffers brutal punishment—until he escapes to live on his own terms as a bushranger. When vengeance against his tormentor consumes him and threatens his life, John finds he has only one holiday wish—to see his fae lover one last time.
A story from the Dreamspinner Press 2018 Advent Calendar “Warmest Wishes.”

This was a sweet story, but it wasn’t quite what I was expecting. The author did a good job bringing me into the story for a short read, and I adored the two MC’s. This author gave me a new perspective on “wood” in the naughty sense.

John is a local thief with a gang of others until he gets caught. His captor is violent and evil and inflicts the most heinous torture upon John. John has no escape and seeks revenge on his captor. He has a place he goes to try and get some serenity and whittles away at gifts for his fae.

Banyn is a fae that helps escort children’s souls to his world until he comes across John. He is fascinated with him right away and breaks his own rules by beginning a relationship with him. He loves his gifts that are left for him and provides John with his very own gift to make him feel all that more of a man.
This was an endearing story, and I hope you enjoy this short read.