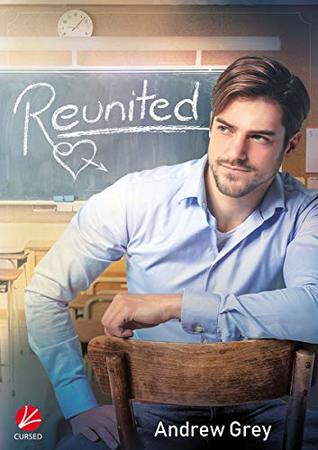 Back in high school, nobody noticed quiet nerd Kevin Howard.
But everybody noticed handsome, athletic, and ultrapopular jock Clay Northrup.
They had nothing in common and lived in different worlds.
But a lot can change in fifteen years, and when they meet again at their high school reunion, Clay is no longer the big man on campus, and Kevin isn’t hiding in a corner anymore.
Can they put aside who they were? Can one night really lead to forever?

I love reading books by Andrew Grey, and while I loved this one, I was also left wanting more. The book is only thirty-two pages long and feels more like an extended teaser for an upcoming novel instead of a finished book. I would be really happy if this book were extended and turned into a longer novel or maybe another book about them. I really enjoyed what I got to know about Kevin Howard and Clay Northrup. There is no sex in this book. There’s one short make-out scene, but no graphic details were given.

Kevin was a quiet nerd back in high school that nobody noticed. He was also on the husky side and had a huge crush on Clay who was in the drama club with him. Not that he thought Clay had ever noticed him. Almost a decade later, he owns four Karate studios and consults on movies. He’d gone to a class with a few of his friends in college and found that he loved it. Through all of his hard work, he’s really slimmed down. When he goes to his high school reunion, he ends up meeting his crush again in the parking lot, and they get to talking about cars and what they’ve been doing since high school. Kevin finds out that he wasn’t as invisible as he had thought to the handsome and ultra-popular jock.

Everybody in high school noticed Clay. Clay had been the guy who had it all. He was a talented actor, had the lead in all the school plays and musicals, and he was on the football team. He was the man everyone wanted to be and the one all the girls had wanted. But in high school, Clay had a secret and he admired Kevin because he was out and seemed so confident in high school. He didn’t hide as Clay did. After marrying his high school sweetheart, Bridget, they moved to New York to pursue Clay’s acting career. When that didn’t pan out, he ended up getting a divorce, and he returned home when his father died to take over his car dealership. His ex-wife was pregnant when she left him, and Clay ended up getting sole custody of his blind son when she was found to be unfit.

I like that Kevin and Clay don’t have anything in common and have lived in different worlds. It would be interesting to see how their relationship would progress. And if their relationship would hold up to all of Kevin’s traveling to his different karate studios and various movie sets to consult when Clay’s son needs a steady environment and routine and especially when all of Kevin’s traveling contributed to his last relationships failure.

I liked this short story, and I really hope that the author will either release another book about Clay and Kevin or that he makes this one longer. I want more of them.