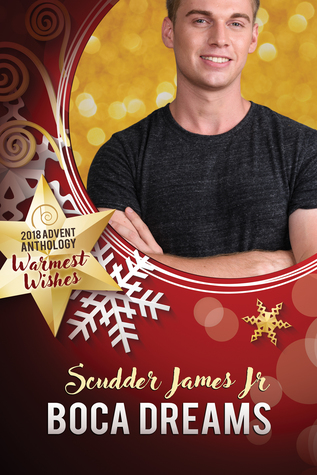 A Story from the Warmest Wishes: Dreamspinner Press 2018 Advent Calendar
You can’t correct the past.
Or can you?
Stephen’s not proud of who he was back in boarding school—spoiled and a player. Now, at the holiday reunion ten years later, he has a chance to show his former classmates who he really is: out and proud, devoted to helping others, and partnered with Victor.
Stephen understands why Victor, who grew up in a poor and abusive household, hates the rich kids at the reunion, but his attitude is ruining everything. Luckily Stephen bumps into Aaron, a former grunge rocker who has also changed. Stephen never forgot their one steamy night together.
With the help of three very unusual personifications of Christmas Past, Present, and Future, can Stephen revisit his mistakes and find the happiness that’s eluded him?

This was an endearing short story about true love. The author did a great job with the characters, and I loved the scenery that was of such beauty. This author kept a good flow with this storyline. I enjoyed most of the characters and loved hating a couple of them.

Stephen used to be a spoiled rich boy and a player with the girls. The problem with that is he was never into girls. Stephen is excited for his schools Holiday Fete. He had his boyfriend, and he was going to come out to all his friends and be the man that he is.

Victor, the boyfriend, was a douche from the get-go. He didn’t want to go with Stephen and did what he could to make it a miserable trip. When they arrived, Stephen introduced Victor as his boyfriend and his friends were very happy for him and his coming out. Stephen loved Seaboard and all its grandeur. He went looking for Victor, and when he walked into their room, he was with one of Stephen’s friends and tried to get him to join them. He storms out and runs into the sexy man he’d fooled around with years ago.

Aaron was a grunge rocker back when they had a steamy night together years ago but has changed since then. Aaron is so happy when Stephen and him run into each other at the event. Aaron goes to the spot of that fateful night so many years ago. Low and behold if Stephen doesn’t show up there, and the magic of that place hits them both. Stephen spills his heart to him, and he is there to pick up the pieces.

This is a fun and enjoyable read that shows that true love does and can exist.