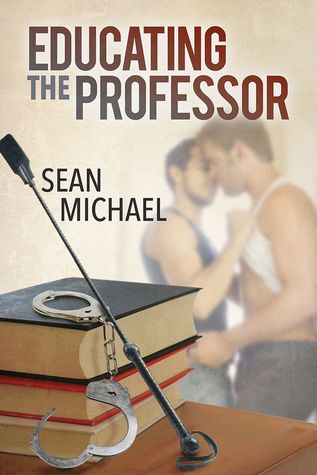 Kenneth Brannigan is a small-town history professor. He’s happy with his life, loves the classes he teaches, and lives in a tiny apartment in a converted house with his best friend, Tim, next door. He’s still recovering from a bad breakup and is content to stick to his comfortable routine. It’s Tim who insists he come to the Queer Alliance’s Rainbow Mixer.
At the mixer, Kenn meets David Burgundy, a new-to-town TA who is working on his masters. Dave is drawn immediately to Kenn and is thrilled when Kenn offers to show him the best pizza place in town. One meal leads to two, which leads to Dave and Kenn spending most of their free time together… and Kenn loosening his self-imposed rules regarding dating and sex for some kinky fun.
Kenn’s ex isn’t going to just let Kenn be, though, and the happier Kenn is with Dave, the less the ex likes it. Will Kenn continue to run away from his past, or will his relationship with Dave help him face it head-on?

I loved Educating the Professor by Sean Michael. I love reading Sean’s books when I’m in the mood for a book with lots of chemistry between the main characters and lots of kinky scenes. This book started out as more of a slow buildup toward the sexy times, but the book also had more of a plot than some of the other books that I have read by this author. If I had to improve on anything in the book, I would have liked to know more about what happened to Kenneth’s ex. The last time we saw him, he was ready to hit Kenn, and the police had been called, but we don’t know if he went to jail or if he backed off and gave up or even if the harassment from the private investigator that his ex had hired was still bothering them. I’m not entirely sure that they needed to be in the book, but like I said before, the book had more of a plot than some of the others. The ending and epilogue just didn’t answer all of my questions about what had happened. There were other parts of the book that definitely made up for the missing answers, like when Kenneth gets his piercings and all of their fun weekends together.

Kenneth had been verbally and physically abused by his ex-husband when he was caught watching what his husband considered perverse videos. He’s told repeatedly that what he wants is perverse and he was beaten until he couldn’t move because of it. He managed to run away and get a divorce, but it’s been over three years, and he’s still being harassed by his ex, which makes sense since he told him that he would make sure that he would forever be alone. So naturally he hasn’t been looking for a relationship, and he’s been relatively happy with just his teaching job and his friendship with his bestie, Tim.+

I loved Tim. He was the perfect best friend, bubbly, happy, and forcing his bestie to get out and do things like going to the Queer Alliance’s Rainbow Mixer. It’s at the mixer that he meets David Burgundy, a new-to-town TA who is working on his masters. They get to talking, and Kenn offers to show David around to all of the best places to eat. And they go from there to being friends with benefits to being in a relationship.

I loved how David is a Dom and has more experience than Kenn but he doesn’t rush Kenn into doing anything that he wasn’t ready to do, and I also loved how supportive he is in reassuring him that his desires aren’t perverse so long as they aren’t hurting anybody.