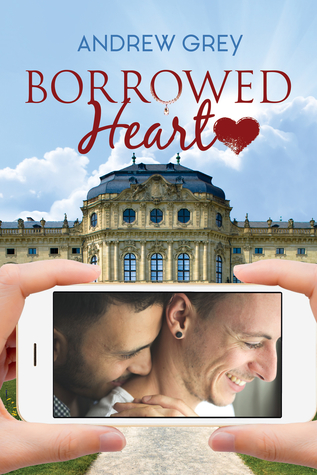 Robin, the recipient of a brand-new heart, knows he can’t give it to just anyone….
Robin’s been through his share of upsets recently, from heart transplant surgery to a brutal breakup. But his experiences have taught him life is short, and he’s ready to seize the day and start anew. A job at Euro Pride Tours is just the kind of adventure he’s looking for. He gets to see the world and live a little, but love isn’t on his radar screen. He isn’t sure his heart can endure that again.
Johan might’ve disappointed his family by striking out on his own, but when he meets Robin, he has no intention of letting him down. Each man is just what the other needs to feel whole again, and while Johan might not be the man Robin originally thought he was, he’s exactly what the doctor ordered to make Robin’s borrowed heart beat faster. As the tour through Germany progresses, they grow closer, but when Robin’s ex joins the tour, he could bring their blossoming love to a dramatic halt.

I loved reading Borrowed Heart by Andrew Grey. I love reading his books, and I’m always so excited when he releases a new book, and I get to review it. I love his writing style and his attention to detail. His characters are complex with real-world problems and issues. I loved all of the little twists and turns that were in the story around Robin’s ex-boyfriend, Mason. I also loved how Robin treated his ex when he shows up on his tour as a late addition and kept putting him in his place throughout the tour instead of being his friend like Mason wanted.

I loved Robin. He starts out in the story as just a tour guide for Euro Pride Tours. It isn’t until we get a little further in the story when he’s talking to his boss that it comes out that he’s just getting over a breakup from a relationship that had lasted for five years. And he was heartbroken over the fact that he’d wasted so much of his new heart’s life on his ex since, as a heart transplant recipient, that he would only get about ten to twelve years out of it if nothing else happened health wise.

After Robin’s breakup, he wasn’t looking to fall in love, but when his bus driver, Johan, shows up, he is surprised at Johan’s appearance. He had gone from having super long unkempt hair and a mountain man of a beard to being cleanly shaven with shoulder length hair and being a total hottie. On his previous tour, Robin had totally ignored and was rude to him, but he isn’t able to do that on this tour. Now he isn’t able to keep his gaze off of him. But Robin is hesitant to do anything about his attraction because of the time limit that he has on his life and not wanting to inflict heartache on anybody else.

I also loved Johan. I loved how he transformed himself so that he would get Robin to notice him. After being his driver for one of his tours and seeing how much joy he brought to his tour group, Johan wanted Robin to notice him, and so he went about changing his appearance to make that happen and then he continued to pursue him during the tour and break down the walls that Robin had up.

I also loved the people in the tour group and how Robin was able to help the different couples with some of the issues that they were having. I also loved getting to know more about the various places that they visited during the tour and would love to one day go on a tour of Germany myself.

This was a wonderful book to read, and I can’t recommend it enough.