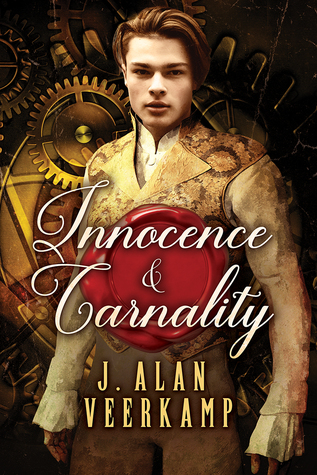 Innocence is his only currency.
The gilded cage of propriety where Nathan grew up as a member of the Deilian aristocracy became a true prison when, at fifteen, his homosexuality came to light and created a terrible scandal. His parents see only one way to preserve their reputation amongst the other noble families: fit Nathan with a chastity belt to increase his value to a potential partner and marry him off as soon as possible.
The recipient of that prize is Lord Rother Marsh Delaga III. After a hasty wedding, Rother whisks Nathan away to the strange and seductive land of Marisol, where Nathan will begin a new life, free to explore the pleasures of the marriage bed, though his life is still not his own.
But Rother’s Delaga House is a place of secrets, dangers, and depravity Nathan can scarcely comprehend. Where friends are few and peril waits around every corner, Nathan must employ all the manipulation he learned from high society, along with his talent for clockwork. Most of all, Nathan must adapt, compromise to survive, and cast off the preconceptions of his homeland.
Because only he can orchestrate his freedom, and it’ll come at a cost.

I loved reading Innocence and Carnality by J. Alan Veerkamp. It’s the first time that I’ve read a book by this author. I can tell you that it won’t be the last time that I read a book by this author. I was captivated by the cover. It reminds me of the covers for steampunk books with the gears being in it and that it had a historical feel to it. Like the Harlequin romances that I liked to read before I got into reading primarily MM books. And I will admit to one-clicking more than a few books just by how much I like the cover. And the blurb when I read it only made me want to read it more. Who doesn’t like a nobleman that’s been made to stay in a chastity belt to ensure his innocence when in the era of dowries and advantageous marriages? I know that I do. One of my favorite movies is Men in Tights, and Maid Marian wears a chastity belt to ensure her innocence before her marriage. Which was a good thing because she was a horny young woman when she meets Robin Hood. But I digress, back to the story.

I loved Nathan and how he grew up as a member of the Deilian aristocracy. At age fifteen, they have their blood tested by the apothecary to have their futures read in a manner of speaking. It comes out that Nathan is a homosexual and it created a terrible scandal. He’s kept in a gilded cage of propriety and fitted with a chastity belt and given lessons that are normally given to the females of the house instead of the lessons given to the males of the house. And as soon as his parents find him a potential partner, they marry him off. The Deilian aristocracy is very much about sex for procreation only after they had a virus that wiped out most of their race. So Nathan has no other value being unable to reproduce than finding a marriage from somebody that is not a Deilian. That recipient is Lord Rother Marsh Delaga III from the land of Marisol. Which is very much different from what Nathan is used to on Deilia. I loved that Nathan got to take his valet and personal servant, Harston with him. I loved Harston and would love to see him find his happy ending.

I liked Lord Rother at first. He came off as being possessive of his new husband, but he gave the impression that he was someone that Nathan could fall in love with. But the more Nathan got to know him the more he was able to see just what kind of person Lord Rother was and the only person that Lord Rother can love is himself. I did love Alexandra and Blythe, and I hated Vivian, and I am so glad she got what was coming to her in the end. Such a manipulative, nasty, vindictive person. I didn’t like Blythe at the beginning of the story. I found him vulgar and common and kind of a brutish man, which makes sense since he’s Rother’s bodyguard. He did grow on me, and I fell in love with him and his loyal heart.