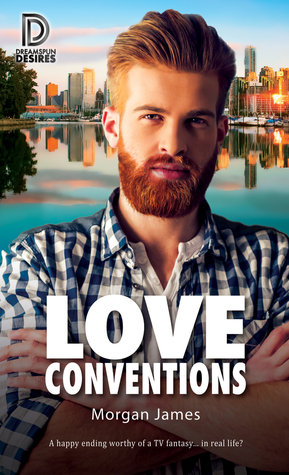 A happy ending worthy of a TV fantasy… in real life?
Ashland Wells is an actor of sci-fi cult fame but with little direction for the future, when handsome grad student Remy Beaumont lands in his lap at a fan convention. Remy is everything Ash ever wanted and wished he could be—including out and proud. For twelve hours they’re the best of friends. But the convention ends, and saying goodbye to Remy might be the biggest mistake Ash has ever made.
A few months later, they’re reunited on a new production—Ash as an actor, Remy a writer—and though Ash doesn’t plan to let him go twice, being with Remy means going public about being gay. He’s not sure that’s a risk he—or his career—can handle, no matter how great the temptation.
If only they could write themselves the romantic happily ever after they both need.

Ashland Wells is a sci-fi actor. He has a strong fan base with his last TV Show and was meeting them in a convention when he meets the cute nerd, Remy Beaumont.
During this convention, Ash and Remy become friends and have the time of their life, until Ash had to go back to Vancouver and Remy to his student life. Months later, Ash is hired for a new TV show, and Remy is hired as one of the writers.
They finally have time to get to know each other, but with Ash being in the closet and Remy out, can they have both the happy ending they want?

Love Conventions by Morgan James is my first book by this author and won’t be the last. I had a great time with them.
Ash is an actor. He’s hot, sexy, strong and talented. He’s also gay and Narnia deep in the closet taking the tea with Aslan. When he meets Remy, he’s off balance because Remy is everything he wants in a partner, but Ash is paralyzed by his fears. When he finds the courage to overcome his fears, he enters a world of love and happiness until reality came crushing his bubble and Ash will have to make a choice. I loved Ash. He’s funny, smart, kind, shy and insecure. He’s hot with his red hair (I have a thing for gingers) and his Scottish accent. He’s also completely paralyzed with Remy. He knows what he wants, but he’s too scared to have it until he doesn’t have another choice. I loved him because he touched me.

Remy is a student in mythological creatures. He’s a complete nerd—fan of sci-fi and all. He’s gay, out and proud, he’s confident in his sexuality, and he won’t hide it. I adored Remy. He’s so funny, kind, smart and sassy. I loved his confidence, and I loved how he helps Ash day by day to come out of his shell little by little. I loved how he refuses to be a victim and chooses himself and his happiness.

The story is told from Ash’s POV only; we follow him in his journey of true happiness. I loved the writing. It was dynamic and fluid with a good sense of humor that I appreciated a lot. The plot was easy to follow, no drama, no big twist, and I liked that a lot. It was a good read, and I had a good time with them.

I happily recommend this book, it’s a sweet candy to read.

4 stars for Dr Who and His Donna.