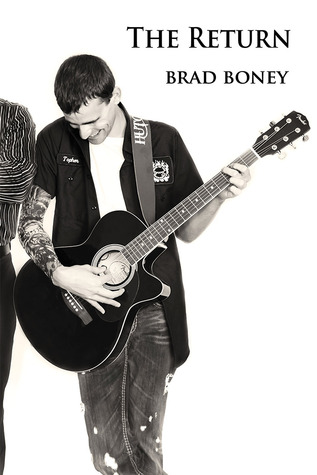 Music. Topher Manning rarely thinks about anything else, but his day job as a mechanic doesn’t exactly mesh with his rock star ambitions. Unless he can find a way to unlock all the songs in his head, his band will soon be on the fast track to obscurity.
Then the South by Southwest music festival and a broken-down car drop New York critic Stanton Porter into his life. Stanton offers Topher a ticket to the Bruce Springsteen concert, where a hesitant kiss and phantom vibrations from Topher’s cell phone kick off a love story that promises to transcend ordinary possibility.

The first book of the series wasn’t really for me, so I was skeptical of this sequel, but damn I was wrong.
Oh man, I cried like a baby! This hits directly into the feelings. I loved it. I was a mess when I finished, but it was worth it.
This was Topher’s story, true, but for me, it was all Stanton.

First, you must now that there’s more than a twenty-year age gap between Topher and Stanton. That’s not an issue for Topher, but it is for Stanton, but that’s really not the point!!!

OMG! This series is escalating from contemporary to paranormal fast! But I will not give you details! Trust me, if you decide to read it, you won’t regret it! Emotional angst doesn’t even cover it when it comes to this story.

It’s constantly back and forth in time from Stanton’s point of view, building up to a finale that will blow your mind. You will get the hunch to where the story might lead, but you’re not quite sure. Because stuff like this is just out of the norm!
While in general, I’m not fond of when the MC’s past love lives are mentioned in books, but this book makes a difference. I enjoyed every word of it, be it from the past or the present.

Stanton is a famous music critic, and Topher is the lead singer and songwriter of his indie band of four. The band are very close friends, coming from a small town from the middle of the nowhere. They’re like brothers, living together dreaming the big dream, but at the same time, they’re very down to earth type of guys.

When fate brings Stanton into the auto shop where Topher works as a mechanic, his life takes a one-eighty. And from there, with mysterious phone calls, Topher starts to discover himself, and his feelings toward Stanton.