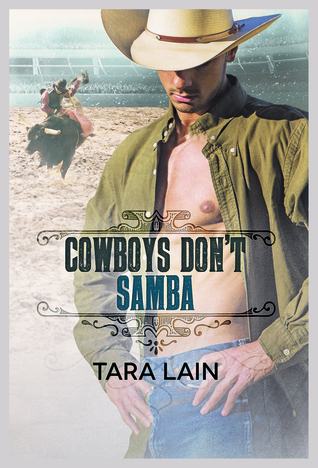 A Cowboys Don’t Story
Maury Garcia’s one of the greatest bull riders in the world—and one of the biggest liars. Can he turn forbidden love with a rodeo rookie into a lasting romance?
Ever since his brother was killed because he was gay, Maury’s worked to take his brother’s place as the bull rider, the provider, and the ideal of his family’s macho expectations. The only thing Maury’s ever done for himself is buy a secret ranch so he can get away from the responsibilities he’s chained himself to. Then he meets Tristão Silva, the younger brother of the one man who could rob Maury of his bull riding championship.
Tristão may be a world-class bull rider in his own right, but his kind, gentle nature and sexy samba hips make Maury long for something beyond his selfless, sexless life. The two men’s lives are worlds apart, even if they’re both buckling under family expectations. Will their future last beyond an eight-second ride?

Oh my god, I loved reading Cowboys Don’t Samba by Tara Lain. It’s the third book in the Cowboys Don’t series. Tara Lain is one of my favorite authors to read. I love the covers for this series. Each one has sucked me in and made me read the blurb. And from there it was easy to one-click the book or in this case put in a request to the publisher to get a review copy to read. And like when I read Cowboys Don’t Ride Unicorns, book 2 in the series, I fell in love with the characters and supporting characters, and I couldn’t put the book down until I had read it all. Each of the books in the series are about a different couple, but part of book three does take place at the McIntyre Ranch owned by Randi and Kai from book 1, Cowboys Don’t Come Out. It’s also where Danny and Laurie from book 2, Cowboys Don’t Ride Unicorns, work and hang out. So to get the most out of the interactions between the main and supporting characters, I do recommend reading the first two books in the series first, even though the book is a standalone.

I loved Maury Garcia. He’s a champion bull rider and main provider for his large family. He’s been riding bulls since he was a child and he’s great at it, but he’s getting up in bull riding years, and he has no idea what he’s going to do when he can’t ride anymore. Coming from a large Hispanic family, he’s also been raised to put family before anything else, even his own happiness. I liked that he’s trying to live up to his brother’s memory as one of the greatest bull riders in the world. I also loved how protective he is of his younger brother, Antonio, when he finds out that he’s gay, especially when he suspects that his homophobic uncles had something to do with his older brother’s murder. I could understand why under those circumstances that he kept the fact that he’s gay a secret. And he was doing a great job of suppressing his urges until he meets Tristao Silva. Who just happens to be the youngest brother of his biggest rival and probably the one person who could take the championship away from him. I loved the chemistry between Trist and Maury and the scene at the bar where everybody was dancing was hot! And Maury’s reaction to Trist’s samba hips is priceless. I also loved that he’s bought himself a secret ranch close to his friend and ex-bull rider Danny and his husband, Laurie. It’s the one place that he can go and be himself.

I also loved Tristao. He’s also a world-class bull rider from Brazil, who’s come to ride the US PBRA circuit with his older brother, who is a world-class jerk and homophobe. But Trist is night and day to his brother. Where his brother is hot-tempered and hates Maury and only helps himself, Trist is kind and gentle, and it makes him happy to share his personal knowledge of how the bulls like to buck. And like a moth to a flame, he can’t seem to stay away from Maury. But just like Maury, Trist is from a large and influential Portuguese family that already has his future mapped out for him, complete with an arranged marriage to a woman.

These two men’s lives are worlds apart, but they have a lot in common. Will they buckle under their families’ expectations? Will their future last beyond an eight-second ride? You’re just going to have to read it to find out.