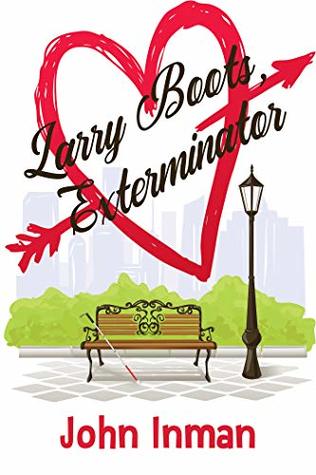 Kenny Long is living a new life. Blinded in an accident, he has taken control of his unexpected reality the best way he can, and it’s working out better than he hoped.
Of course Larry Boots doesn’t know any of that. All he sees is a beautiful man sitting on a park bench.
Larry has a few problems of his own: his mother. His job. The lack of romance in his life.
His job. In the course of that job, Larry strikes up a friendship with Kenny. The next thing he knows, he’s so head-over-heels in love, even his mother doesn’t seem so bad. Of course his career is still a problem, but he’s working on that. Hopefully he’ll have the problem resolved before the man he’s being paid to murder succeeds in murdering him first.
And before the man he loves finds out he’s a cold-blooded killer.

Larry is an exterminator. He’s paid to kill people. He’s paid to do right for all their wrong. He doesn’t like his job; he doesn’t like his lonely life either. When he meets Ken at a bench park, Larry doesn’t see a blind man, just a beautiful man that he wants to win over. Larry is ready to leave his career behind, but first, he has to survive his last job.
I adored this book, it was funny, sweet and beautiful. I had a great time reading this story.

Larry is an exterminator, he hates to be called a hitman, even if technically it’s his job. He’s at a crossroads in his life, between his job, his crazy mother and his new lover, Ken. Larry needs to move on from his old life, and Ken is the perfect motivation to help him. I adored Larry, he’s so funny, kind and smart. He’s not a cold, heartless killer, on the contrary, he’s a compassionate man and very empathic to his clients’ pain. I loved him more with Ken, how he was romantic, caring, and madly in love with him.

Ken is a blind man. He lost his sight after a car accident, and even if it was hard and painful for him, he tries his best to adapt to his new situation, and he succeeded. Meeting Larry wasn’t in his agenda, or falling madly in love with him either, but Ken makes the best of this despite his own fears. I loved him too, he touched me a lot. He was a victim of a tragic accident, but he wasn’t a victim of his condition. It shows how strong he really is. I completely melted for him.

The book was written in the first person. Larry is our narrator. I loved it, it was well done, funny and dynamics. The writing was very good, I was captivated from the beginning and hooked in the story throughout my read. The story has a rainbow of feelings. Like I said, Larry isn’t a cold killer, he isn’t incapable of love and compassion, and the author highlights it in his character. I appreciated it as it changes from the stereotype killer incapable of love until he meets the right person blah blah blah.

I had a pleasurable time with them, and I gladly recommend it.