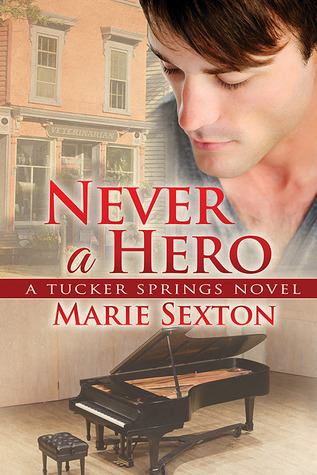 Owen Meade is in need of a hero. Sheltered, ashamed, and ridiculed by his own mother for his sexuality, his stutter, and his congenital arm amputation, Owen lives like a hermit, rarely leaving his apartment. He hardly dares to hope for more… until veterinarian Nick Reynolds moves in downstairs.
Charming, handsome Nick steals past Owen’s defenses and makes him feel almost normal. Meeting his fiery, determined little sister, June, who was born with a similar amputation, helps too. June always seems to get her way—she even convinces Owen to sign up for piano lessons with her. Suddenly the only thing standing between Owen and his perfect life is Nick. No matter how much he flirts, how attracted to Owen he seems to be, or how much time they spend together, Nick always pulls away.
Caught between his mother’s contempt and Nick’s stubbornness, Owen makes a decision. It’s time to be the hero of his own story, and that means going after what he wants: not just Nick, but the full life he deserves.

I thought Marie Sexton did an excellent job of showing us a glimpse into the life of a man who was born with a congenital arm amputation and also suffered from a stutter that gets worse with his social anxiety. And instead of having supportive parents, he’s ridiculed by his own mother for his sexuality, his stutter, and his congenital arm amputation.

I liked how we get to see both sides of the equation in do you help a person with a disability and how the person with the disability perceives that help. In the book, Owen doesn’t like to be helped or stared at, but he also doesn’t like it if he is ignored. He thinks that he knows what the normal person is thinking and feeling when they look at him, but he isn’t normal, so he can only assume. I liked that Nick is there to give Owen a different insight into why normal people react the way that they do. I know that I’ve struggled with that before. Do you look at the missing limb or not, do you help if they’re struggling to do something or let them struggle to do it on their own. I never know what’s right or acceptable, but I know that I definitely don’t want to offend them. So I liked that I got to see it from both of their points of view.

I liked Owen Meade. Because of his upbringing and the way he’s treated by his mom and how he perceives the outside world, he has become a bit of a hermit and rarely leaves his apartment. He works from home for a marketing company, designing newsletters, brochures, and putting together postcard advertising campaigns. He tends to live vicariously through the lives of the people that live in the apartment below his. The highlight of his day is when his neighbor plays the piano when she gets home from work, but after living there for three years, she moves out but doesn’t take her piano with her. Two days later, Owen gets a new neighbor. But unlike his old neighbor, this one wants to be friends.

Nick Reynolds is a veterinarian, has three dogs, a sister that also has a congenital arm amputation, and is in the closet at work due to a homophobic boss. I liked how he tried to get Owen out and interacting with the world again. I also liked when he introduced Owen to his younger sister, Jude, who also has the same amputation that Owen has. I really liked how Jude interacts with the world and doesn’t let anything stop her from doing what she wants to do, including convincing Owen to take piano lessons with her and to perform a recital together, each playing one hand of the song since Owen is missing his left hand and Jude is missing her right.

I really enjoyed seeing the personal growth in Owen and how he starts to stop caring about what other people think of his missing arm and doing what he wants to do.