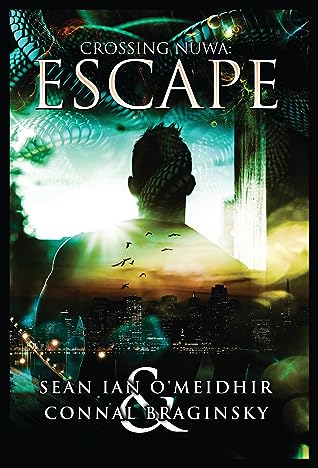 For sheltered Robbie, one week of freedom leads to sexual awakening and adventure… but when his world intersects with Theo’s, they’ll need all their wits and Theo’s magic to fight for their future.
Rare male weresnake Robbie has had his whole life decided for him down to his meals. But when the time comes for him to perform an unspeakable duty to his clan, he runs.
San Francisco Pride is in full swing when technomage Theo spots a scared-looking young man with brilliant emerald eyes. He’s only looking for a hookup, but before he knows why, he’s taking Robbie home and introducing him to champagne and enchiladas. He doesn’t have any intention of falling in love.
Robbie doesn’t want to return to his clan, at least not without trying to fit a lifetime of experiences into a week, but every day he stays puts Theo in more danger.

Escape is my first book by Sean Ian O’Meidhir and Connal Braginsky, and I absolutely loved it. Escape is the first book in the Crossing Nüwa series, and I can’t wait for the next book to come out so that I can devour it just like I did this one. I love to read paranormal books but don’t find a lot of books about were-snakes or techno-mages. The characters were interesting and loveable, and I loved the plot.

I loved how the were-snake clans are matrilineal and are ruled by a matriarchy. The clan believes the females are strong, and the men are weak. The females don’t have any limitations on what they can do, but the men are seen but not heard, and as children, the males are allowed to play and interact with their female cousins until five years before they are considered mature. Then they live in seclusion until they’re considered mature and then they’re paired with females to breed the next generation of pureblood Nüwas.

And that would be all fine and dandy but not only is Robbie a rare male were-snake but he’s also gay and the thought of being paired with females is repugnant to him. Having been in seclusion for the past five years, all that Robbie has learned about being gay is from reading gay romances, gay porn, and watching gay pride parades. What he wants to do more than anything before his big birthday is to go to San Francisco to the gay pride parade and experience being gay before being forced to do his duty, and so he runs away and is picked up by a truck driver who just happens to be going to San Francisco. However, Robbie has been sheltered and doesn’t know how to do anything in the outside world. He has to watch and follow humans to figure out how to buy food and find places to sleep, but he gets to go to the pride parade that he’s always wanted to attend and it’s at the pride parade that he meets Theo.

The parade is in full swing when Theo spots a scared-looking young man with emerald eyes. He’s only looking for a hookup, but before he knows it, he’s taking Robbie home and introducing him to alcohol and Mexican food. Robbie quickly grows on Theo, and Theo takes him with him when he DJ’s at the various clubs and helps him experience what it is to be gay. But Robbie is found by one of the clan’s enforcers and only given a week to experience freedom before she’ll be back to deliver him to his clan leader, who just so happens to be his mom.

I loved how Robbie is able to change the structure of his mouth and use his snake senses through his tongue while still a human, and, I won’t lie, it was a little gross that he drinks blood in addition to eating human food. But Robbie’s week of freedom is cut short, and Theo will need all of his techno-mage magic to get Robbie back. Then he will have to wait for Robbie to decide if he feels the same way about Theo as Theo does for Robbie while he lives with a childhood friend that lives outside of the clan with a human and teaches him how to survive in the real world.
I loved how the authors tied up all of the loose ends, and the book ends in a HEA. I’m excited to see if the next book in the series is going to be about how Theo and Robbie’s relationship is progressing or if it’s going to be about a new gay were-snake.