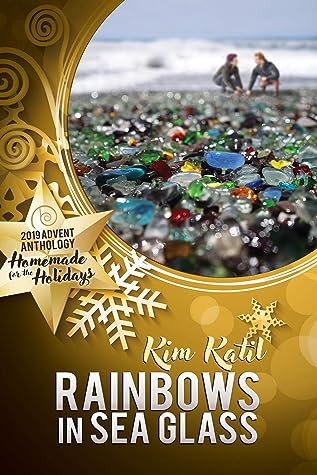 A story from the Dreamspinner Press 2019 Advent Calendar collection Homemade for the Holidays.
Kyle has loved James, his best friend’s older brother, for as long as he can remember. Unfortunately James is a player, and Kyle has no desire to be his latest conquest. When James suddenly turns the full weight of his charm on him, Kyle flees to Cape May Point to collect sea glass and Cape May diamonds to make a St. Nicholas Day present for his aunt.
James has always taken Kyle’s presence for granted and he’s shocked to find how integral Kyle is to his life and future happiness. Braving his family’s well-meaning attempts to help and a sudden winter storm, James heads to the shore to convince Kyle that the most precious thing they’ll find on the beach is each other

I wanted to like this short story by Kim Katil, but unfortunately, it was only okay.

From the blurb, I was hoping for a story full of longing and angst, and instead, Kyle runs away when James, the guy he’s been in love with since forever, finally starts to show that he’s interested in him as a man and not as his younger sister’s best friend. Sure, his excuse is that he doesn’t want to be another notch on James’ bedpost, so he’s been hiding from all of his friends since James danced with him at the club six months prior. And so he runs away to Cape May Point to the rental house that James is having remodeled. It gives him a chance to get his head back on his shoulders and find some sea glass and Cap May diamonds to make a present for his aunt. He doesn’t expect James to follow him there.

I didn’t like Kyle’s best friend, Maria, or Kyle’s mother. His best friend came off as not caring about his problems in the beginning, just that he hasn’t been around to make her look better when they go clubbing. Maria does grow on you as the story progresses, and she helps her brother, James, get Kyle.

His mother is very self-centered and unlikeable. I did like Aunt Ollie. She was very likable, and I could see why Kyle would want to make something pretty for her room since she was like a second mother to him.

I did like the scenes with Stan, where he’s showing Kyle and James some of his art projects to get an idea of what he should make his aunt. I also liked getting to see inside James’ head and how he felt about Kyle. I liked him better than Kyle, although I thought the dialog between James and his sister was a little forced at times.

Although not a bad story, I think it would have done better as a novel instead of a short story where the author could have started the story maybe six months earlier, and we could have seen the night of the dance at the club between Kyle and James and then what happened after they had been together for a while.