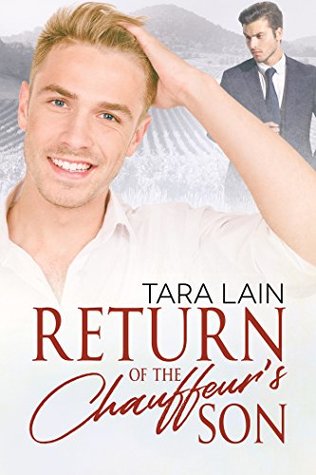 Luca McGrath may be returning to Napa Valley, California as a promising chef with dreams of starting his own restaurant and winery, but his heart still lives with bad-boy billionaire’s son, James Armstrong. Luca spent his childhood playing games with the golden boy of California society, so blinded by James he barely noticed the dark, quiet lure of his conservative older brother, Dylan Armstrong.

But now, Luca’s home and his own powers of attraction are enough to make James question his dedicated heterosexuality and his promised marriage to a wealthy and powerful businesswoman. The obvious attraction between Luca and James spurs Dylan into action—but he’s fighting a huge secret. While Luca dreamed of James, Dylan dreamed of Luca. When Luca gets caught in the struggle between the brothers and gets accused of culinary espionage he’s ready to chuck the fairy tale—unable to even imagine Dylan’s power to make his dreams come true.

Return of the Chauffer’s son by Tara Lain is a wonderful adaptation and retelling of the movie Sabrina. The storyline and flow of the story were perfect. The characters were easily recognizable with all of their little character nuances. The book was well written and nicely edited.

I loved the love triangle and how Luca kept getting pulled back and forth like the Armstrong’s tug toy. I liked that Dylan and James were at the opposite end of the spectrum from each other. James’ the golden boy and Dylan’s dark and mysterious.

James’ portrayed as the straight golden boy of California society. He’s a super flirt, extroverted, and self-centred. He also goes through women like skittles. He throws himself into new ideas wholeheartedly but doesn’t think them through and just as quickly moves on to the next impulse without care for who he hurts.

Dylan’s the conservative gay older brother to James. He’s a type A personality and is used to getting his way. He runs Anderson Technologies with his mother. Dylan’s used to cleaning up after the destruction that James causes and tries to avert it if he can.

Luca grew up on the Armstrong property with his dad. His dad’s the family chauffeur, and Luca grew up playing with James. They were the best of friends and Luca fell in love with him even though he knew it wouldn’t be returned. His father and Mr. and Mrs. Armstrong noticed his crush and sent him to France to culinary school with the hope that when he came back the crush would be over. Unfortunately, even getting a job in New York and staying away for a total of 7 years didn’t help. And now he’s back home after getting a new job at Culinary Arts. And Luca still wants James and is crushed when he learns of James’ engagement. And then even more confused when James starts flirting with him.
Dylan’s worried about James’ new attraction to Luca and is worried that if he breaks up his engagement that it will cost Dylan the merger that he has been working on with the fiancé’s family. He tries to redirect Luca’s attraction to him instead of James to save the deal, and it works. But he didn’t count on falling in love himself. Not that he will admit it to himself.
But Luca can’t deal with his confused feelings for the brothers and doesn’t like being yanked back and forth between them. It’s too much pressure to deal with in addition to trying to come up with the winning culinary dish for the local cooking contest that’s coming up. But when he’s wrongfully accused of culinary espionage and fired from his job, he sees all of his dreams of owning his own restaurant and winery disappearing and finds that living in California’s too much and moves back to New York to see if he can get his old job back.

But there’s no way that Luca leaving is going to fly with the Armstrong family. But who will it be that brings him back? And will he be able to convince Luca that he loves him?

Another great book by Tara Lain. I haven’t read one of her books yet that I haven’t loved. I definitely recommend her books to everybody.