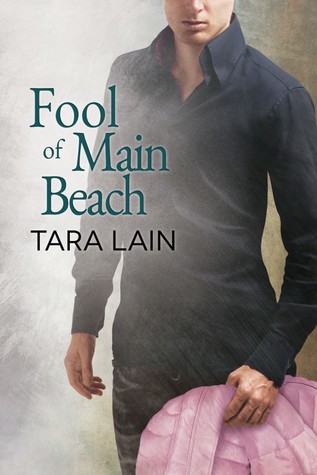 Merle Justice wants to reach for the stars, but it’s tough to get respect when playing a teenybopper vampire on TV. Then he meets a famous director anxious to give him all he thinks he wants—and maybe a bit more. Everything’s looking up until a life-threatening encounter with some homophobes on Main Beach puts Merle face-to-face with a Sasquatch-sized hero in a pink puffer coat.

Tom Henry defies description. As unsophisticated and simple as an angel, he walks through life content with who he is and asking for very little except to care for his sister, Lily, and the dogs he loves. Then he meets Merle, the embodiment of dreams he barely knows he has. Merle knows the people who hold his future in their hands might love Tom—but they’ll never understand Merle and Tom together. Tom knows it too.

Fool of Main Beach is the fifth book in the Love in Laguna series by Tara Lain. It’s the first book in the series that I have read, but I can already tell you that it won’t be the last. I enjoyed the glimpses that I got into the lives of Merle’s friends, and I can’t wait to go back and read their stories. The Fool of Main Beach is a standalone book, and you don’t have to have read the other books in the series to thoroughly enjoy this one but reading the other books in the series could only enhance your reading experience. I can’t express how much I enjoy Tara Lain’s writing style and how loveable her characters are. I still haven’t read a book of hers yet that I haven’t loved.

Merle Justice is a TV actor looking to get his break in the movie industry. He’s the black sheep in a family of intellectuals. As a result, he doesn’t get a whole lot of support or respect for the success that he has gotten for his reoccurring role as a teenybopper vampire on TV. I also greatly enjoyed that for once the movie actor doesn’t have to hide the fact that he’s gay to be considered for the great movie roles. I also loved how down to earth Merle is and that he can’t stand how snobbish other actors are and is tired of dating them. He’s recently bought a house in Laguna to be close to his friends and is having one of his friends remodel it completely before he can move in. While waiting for that to be completed, he’s staying with his best friend Ru and his husband. When he’s nominated for best supporting actor for his TV series, his friends throw him a congratulations party even though he didn’t win. Needing some space from all of the well-wishers, he takes a walk on Main Beach and gets accosted by four homophobes. Things aren’t looking great until he’s saved by a Sasquatch-sized hero wearing a puffy pink coat with the innocent smile of an angel.

Tom Henry’s been on his own since he was fifteen when his parents told him to leave after finding out that he was gay and that he had no desire to be anything but gay. His parents are all about the church and appearances. He has a younger sister Lily that calls him when she needs something that requires money. Although, she does redeem herself throughout the book. Tom’s a certified electrician, and he works for Bill who happens to be Merle’s friend and doing the remodel on his house. I’m not sure how to describe Tom, I kept trying to categorize him throughout the book, and the best I can come up with is he reminds me of Forest Gump. He has that innocent, naive, always happy, believe the good in everybody, would never hurt a fly unless they were hurting one of his friends or family, always putting everybody else’s needs before his own, personality. At times I wanted to shake him especially when he would put himself down, but he was such a lovely character especially around his dogs and the dogs at the shelter that I couldn’t help but fall in love with him.

But will his tendency to put everybody else’s needs before his own come at the cost of what he wants most in the world or will he finally agree that sometimes it’s okay to be selfish in what you want?