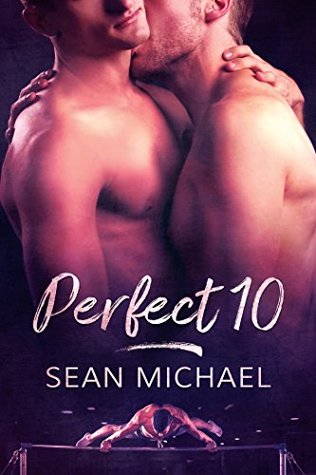 Despite a life-threatening injury sustained in a vaulting accident, top gymnast Christopher Allen is determined to get back to his former perfect condition and compete again. Brian Rainings is a coach in need of someone to believe in, and he takes Chris on, admiring the spirit and determination that drives Chris to succeed. And admiring the sturdy, muscled body Chris maintains.

Admiration soon leads to something much hotter as they train together. From their scorching first kiss, Brian and Chris’s chemistry is obvious, but they have a long road ahead to get Chris back into shape. Months of hard work lead to success, with Chris gaining strength every day and finally finding the elusive sponsor he needs for financial support. Secrets, hidden dangers, and family troubles plague them, though, and they have to face the fact that Chris might never compete again and score that perfect ten.

I was really excited to read Perfect 10 by Sean Michaels. I have read a couple of his other books, and they are usually full of fabulous chemistry and hot scenes, and this book did deliver on that part. I also loved the blurb and the cover for the book. I just wish that the book had been longer and that it hadn’t ended where it did. I would have loved to see Chris actually compete in his upcoming competition, but unfortunately, that doesn’t happen. I am hoping that the author either makes this into a series or puts out a sequel. I would love to know how Chris holds up to an actual competition and how he places and whether his relationship with his coach Brian can handle the strain. Otherwise, the book was just what I was expecting, and I wasn’t disappointed until the end. And even then it was a good end, I just wanted to know more. The story was well written and nicely edited.

I loved Chris’ personality and his drive to get back where he was before his accident and how he won’t let anything stand in the way of his goals. I loved that Brian his new coach is there to support him in any way that he can. Oh and he definitely gives the best massages. I wish I had somebody to work out all of the knots in my body. Yep, just a little bit jealous. I also loved Chris’ twin brother Rob and his super outgoing personality. He had me laughing on more than one occasion. And the play on names that their parents used when they named them was awesome. Christopher Robin. You know like the human in Winnie the Pooh. Even if the parents got the names mixed up since Chris is the younger twin by seven minutes.

Chris was a big name in the gymnastics world until he was injured. But while recovering from back and shoulder surgery, he lost his coaches and all of his sponsors. But even having to start over completely and having to find a new coach won’t diminish his determination. He’s determined to go back to competing and win a medal. But first, he has to find a coach.

Brian used to be a gymnast until he had a knee injury that took him out of the game. He teaches gymnastics at a private girls’ school, but he dreams of coaching a male gymnast and making his name by coaching him all the way to the big times. So when he gets wind that Chris is looking to make a comeback, he makes sure to get an interview.
They make the perfect team. I liked how Brian’s there to make sure that Chris doesn’t overwork his injuries as he rebuilds the muscles and flexibility that he needs to compete. I also loved that he never once tries to tell him that he shouldn’t be trying to compete. He’s the perfect boyfriend/coach.

I would recommend this book to anybody that is looking for a book about courage, hope, and love.