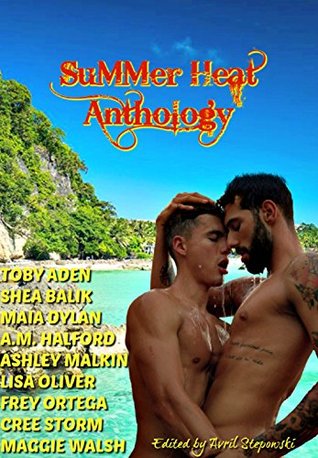 The sound of the water rushing onto the beach. The sunrises and sunsets that are reminiscent of a stunning postcard. As perfect as the idyllic setting is, there is still something missing that you can’t quite put your finger on.
Then across the beach, the bar, the pool, you catch sight of the man you let get away, or the first sight of your destiny, and your mind travels along a road that you don’t want to end.
But a summer love is just for the summer, isn’t it?
Join these NINE Best Selling MM authors as they take you on a journey of summer love at its best!
Twenty percent of all proceeds donated to The Trevor Project. Trevor provides valuable resources to LGBTQ youth who may not have anywhere else to turn.
WARNING: This title contains adult themes

Join these NINE Best Selling MM authors as they take you on a journey of summer love at its best!
Twenty percent of all proceeds donated to The Trevor Project.
There is a little bit of everything in this collection, so there is sure to be something that will tickle your fancy. From contemporary romance to paranormal romance and even a sci-fi romance. I know that I enjoyed reading the stories. There were even a couple that sounds like they could be the beginning of a series. I also loved that at the end of each story is a little bit about the author and links to their other books.

Summer with My Billionaire Captor by Toby Aden – I liked this contemporary romance story, but I would have liked a little more storyline in-between sex scenes, like what they are doing to try and find Shane, stuff like that. The story also ends in an HFN. 3 OptimuMM’s
Billionaire Alejandro’s pissed when he realizes that his accountant Shane has embezzled ten million dollars of his money. He’s determined to teach him a lesson, but when he goes to the address listed for him, he is shocked when the person he apprehends isn’t Shane but his estranged gay twin brother Shawn. Not believing Shawn that he hasn’t had any contact with his twin in over 5 years. He abducts Shawn as leverage until he can find Shane and get his money back. He takes him to his private island, where they get over their animosity for each other and have lots of sex.

House Party by Shea Balik – I loved this contemporary romance story. To me, this story alone is worth the price of the collection and definitely made up for the first book in the collection. 5 OptimuMM’s
Scotty is tired of having wall to wall neighbors and having the cops called when he has friends over and they party. So he buys a house with a pool so they can throw their summer parties in peace and he invites all of his neighbors to his first party. However, the neighbor that lives behind him isn’t so keen on his new loud neighbors. Ashton’s antisocial and focused on his crusade to have food companies stop poisoning them with processed foods and GMOs. He’s also a geneticist and is a workaholic. So, of course, he’s going to have a problem with the loud thumping music when his new neighbor throws his first summer party. All he wants is for them to turn down the music, but instead, he manages to piss off Scotty’s friend Fritz, who retaliates by turning the music up even louder. Scotty tries to apologize the next day with a brownie peace offering, but he has no idea that he’s about to offend Ashton even more by offering him a processed treat. But Scotty’s determined to make Ashton like him and maybe more.

His Fated Summer by Maia Dylan – I also greatly enjoyed this paranormal shifter story about bear shifter Vaughn and his human mate Luca. I loved that Vaughn finds his mate while going clubbing on his vacation. But Luca is on the run from his past and doesn’t want Vaughn to get hurt because of his past. Will he allow Vaughn and his friends, Tent and Miles, to help him with his problems or will he run again? 5 OptimuMM’s

Simon’s Wolf by Ashley Malkin – I really liked this paranormal shifter story. It did start out a little slow, but by the end, I was in love with the characters. 4.5 OptimuMM’s
Hayes is a lone wolf that comes back to challenge the alpha of the pack he had left. He’s then poisoned and betrayed by the son of the alpha that had begged him to challenge the alpha in the first place. Sick from silver poisoning he’s challenged by the son, Peter, and left for dead. Simon is a veterinarian and just moved to the area. He’s had a hard time fitting in and making friends. He almost runs over a badly hurt wolf in the middle of the road and takes him back to his clinic to fix him. Hayes knows instantly that he is his mate. Once his mate has saved his life, smoking hot chemistry and scenes follow.

If You Can’t Stand the Heat by Lisa Oliver – I loved this paranormal shifter story about Omega on the run, Wyatt and mercenary for hire Alpha Stone. Stone was offended when he was hired to bring back a runaway omega. He considered it beneath his abilities, but he agrees to do it anyway. But nothing is as he was led to believe. He definitely didn’t expect to find his fated mate or that he would have his 4-year-old sister with him. Wyatt and his little sister Madison have been on the run from his uncle and pack alpha who wants to mate him even though they are related by blood, and his uncle already has three bond mates. He would rather die than go back to his uncle and Stone will do anything to protect his mate and new family. 5 OptimuMM’s

Break Free By Frey Ortega – I really liked this story about merman Yi and his human mate Alex. The storyline has a little mermaid feel to it that I really enjoyed. 4.5 OptimuMM’s
Yi is the prince of the sea and has a fascination with the land and its inhabitants but his overprotective mom the queen wants him to stay safe at home. Alex is an accountant that works for his father. He’s stressed and over worked and books a month long vacation in the Philippines at a 5-star resort on the beach. While exploring the scuba diving entrances at the resort, Alex comes across Yi, and the two hit it off. But Alex isn’t sure if it is worth the trouble to have a new relationship when he’s only going to be there for a month, and Yi has to sneak around his mom and risk her displeasure. I liked how the author ends the story with the line “The end—or rather, The Beginning.” I really hope it’s just the beginning because I would love to read more. The story ends with an HFN.

Mechanical Heart by Cree Storm – I liked this Sci-fi story, but it could have benefited from another round of editing or beta reading to help tighten up the story and fix the wrong verb tenses and the various random drops of info that wasn’t important to the story. I did like the chemistry between Valkin and Bryton, and the sex scenes were hot. The author also sometimes forgot about the major height difference between Valkin and Bryton. Valkin’s seven feet three inches and Bryton is only five feet two inches tall. So Bryton would have only come up to around Valkin’s waist so kissing while standing up would have been uncomfortable at best. I did find the storyline intriguing, so I can’t wait to read the next book in the series. Which looks like it will be about Bryton’s best friend Marty and Valkin’s best friend Faruke. 3.5 OptimuMM’s

Cirque de Carnival by Maggie Walsh – I loved this paranormal shifter story about Cameron and Thorn. This is a fated mate book, and this book does the genre justice. Cam and his brother Jordan run away from home when their father finds out they are gay. They decide to find their mother who had left when Jordan was two. They know from their abusive, alcoholic father that she ran away to join the circus and they even know the name of the circus—they just have to find it. Thorn is the heir and nephew to the owner of the circus, and he’s protective of his circus family. So when he sees two young men lurking around the big tent, he detains them to find out why they are there. Imagine his surprise when he realized that Cam is his fated mate. 5 OptimuMM’s

***I would like to thank the authors for the privilege and opportunity of reading this ARC. My review is an honest opinion of the book***