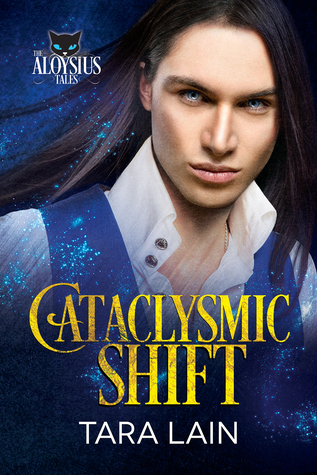 Aloysius, the magical black cat and powerful witch’s familiar, isn’t afraid to go into battle to protect his master, but the outcome of the fight turns his feline world upside down. A direct hit of magic steals not only his memories and power, but even the body he’s lived in for several centuries. When he wakes up naked on the floor of a veterinarian’s office, it isn’t as the cat Aloysius, but as the sixteenth-century French gentleman Alain Bellarose. And when Alain sees sexy and enigmatic veterinarian Luke Elliott, he decides he’ll make the best of his time as a human.

Luke is a man with secrets who generally prefers the company of animals—though the flamboyant boy who washes his face with the side of his hand and tries to lick his own privates might prove an exception.

Meanwhile, Witch Master Killian Barth and his secret weapon, Sammy, struggle without Aloysius’s power to draw on. Two evil females are circling, and seeing the coven’s weakness, they’re about to move in for the kill. When Alain’s memories return, he’s faced with the ultimate dilemma: protect his community or stay with the man he loves.

I didn’t think this series could get any better after reading Brush with Catastrophe, but I was wrong. I loved Cataclysmic Shift by Tara Lain. It’s the third book in the Aloysius Tales series. In this book, Aloysius finally gets a book that focuses on him. And boy does the magical black cat and powerful witches’ familiar have a rocky road ahead.

Aloysius isn’t afraid to go into battle to protect his master and his master’s friends like Sammy. He acts as a conduit for both Killian and Sammy to draw magic from. However, in the midst of a battle with two European witches, a direct hit of magic steals not only his memories and power but even the body he’s lived in for several centuries. Fearing for their unconscious cat’s life, they take him to a vet that Killian’s human mate, Blaine, knows through his men’s group. Luke’s there to reassure them that although he’s unconscious, he seems to be in good health. However, when he goes back into the room to do some test, he finds that Aloysius has disappeared. Luke promises to keep his eye out for him, and Killian and Blaine head for home believing that Aloysius had already headed home when he woke up.

So when Luke finds a gorgeous naked man playing with all of the boarding animals at his veterinary practice the next morning, never once does it occur to him that this could be Aloysius. And why would it, Luke is human and doesn’t know anything about the paranormal community. Even Aloysius doesn’t remember who he is. He only has vague memories of being a sixteenth-century French gentleman named Alain Bellarose.

But Alain has no memory of his time spent as a magical cat or a witch’s familiar. All he knows is that he can talk to animals and that the vet that found him and has given him a place to stay is hot and somebody that he would like to make time with. But he has instances where he feels like he’s being pulled by a magical force to protect somebody. Now, if he could just figure out who he’s supposed to protect. When Alain gets his memories back, he’s faced with the biggest dilemma of his life—protect his community or stay with the man he loves.

I loved Alain. His personality and antics had me laughing on more than one occasion. Especially when he gave himself a cat bath and tried and was successful at licking his own genitals. And I loved how protective he is of Luke. I also loved Luke. He has a past full of secrets and an ex-boss that refuses to let him go. I can’t wait for the next book in the series to come out. If you loved the other books in this series, then you have to read this book. You won’t be disappointed. I know that I wasn’t.

Thank you, Tara Lain, for another fabulous book.

One thought on “Review: “Cataclysmic Shift” by Tara Lain”