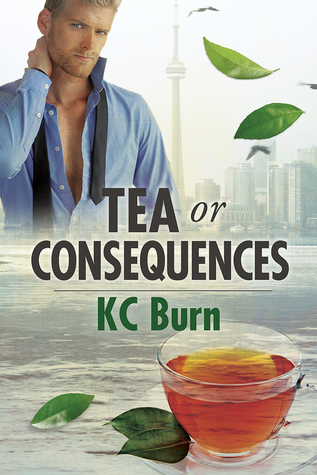 Maybe Riley isn’t living up to his full potential, but being a temp executive assistant suits him. He’s never bored at work, he’s got friends who let him geek out, and he’s got a carefully crafted twink exterior… which might be getting constrictive now that he’s on the other side of thirty. Life isn’t perfect, but it’s comfortable.

It all unravels when he takes a job working for a tea-obsessed cosmetics queen, the owner of Gautier Cosmetics. During the launch party for a new product, Riley finds his boss dead under suspicious circumstances, and the homicide detective is none other than Tadeo Martin, Riley’s high school obsession who never knew he was alive.

Tad drafts Riley to get the scoop on the inner workings of Gautier, and for Riley, it’s like a drug. His natural inquisitiveness is rewarded with more and more Tad. Unfortunately, his snooping puts him in the running for two other roles: suspect and victim. The killer doesn’t care which.

Riley Parker works as a temp for Gabrielle Gautier, owner of Gautier Cosmetics. Being a temp suits Riley just fine, he gets to move on to somewhere new whenever his contract finishes, so he never gets bored or frustrated with being in the same place or working with the same people, and it also pays well. But deep-down Riley is a geek at heart, he’s always been this way since high school, and loves nothing more than joining his friends for gaming days/nights. Riley may still be the same inside since high school, but on the outside, he’s made some big changes. He’s changed his style, dyed his hair blonde and wears blue contact lenses to change his eye colour, but his love-life is still practically non-existent. In the few weeks that he’s been with the company, Riley has become close to the receptionist, Alisha, and they have formed a good working relationship and friendship. And although some people find Gabrielle hard to work with, Riley really enjoys being her assistant, she’s even got him interested in her favourite drink, Tea. Gabrielle’s children, François and Floriana, are VP’s of the company and like to make clear their distaste for most of the staff, especially Riley, and some of their mother’s plans and ideas.

Riley’s parents died when he was twelve, so his older brother Jonathan raised him, but they don’t have much in common due to their age difference, and they’ve never been very close. That distance has increased over the last few years because of Jonathan’s wife, who Riley doesn’t get along with. So apart from his friends, Riley is pretty much alone in the world, but he’s okay with that.

When Riley discovers Gabrielle’s dead body in her office on the night of a launch party, he’s overcome with shock and grief, but when the police arrive to investigate, Riley is even more surprised to find that the detective assigned to the case is none other than his high school crush, Tad. In school, Riley was often picked on by Tad’s friends for being a geek, and also out and proud, but it didn’t stop him fantasising about the things he wanted Tad to do to him, even though he knew there was no way it would ever happen. Riley couldn’t be more glad that his appearance has changed since school, that way Tad won’t remember him, and he can pretend he doesn’t recognise Tad either, even though just seeing him has made all his forgotten desires and fantasies come rushing back.

Due to the investigation forcing Riley and Tad to work together to find out what happened to Gabrielle, Riley begins to crave attention, contact, and time with Tad. He thinks that if he can snoop around and try and find some clues as to what killed Gabrielle, then he has an excuse to meet up with Tad to pass on the information, without it looking like it’s because he’s attracted to him. Only, Riley didn’t plan for the fact that Tad would be the one who made excuses for them to spend time together, and in that time together, Tad seemed like he was interested in Riley’s life, not just the investigation. When their relationship makes the change from witness and detective to friends and lovers, Riley and Tad need to do what it takes to keep their liaisons secret from everyone around them, while trying to find out what caused Gabrielle’s death. But keeping feelings and relationships hidden is easier said than done when Riley gets caught up in the crossfire.

I loved this book, the story was really enjoyable and interesting and had me completely hooked. I was really impressed with how the story spun and who the killer turned out to be because I was thinking it was going to be someone completely different. The author has done a fantastic job putting this storyline together and writing realistic and believable characters. I really don’t think there’s a negative thing I can say about it.

If you want a book that will captivate you and have you thinking the whole way through, then this book is right up your street, it’s a perfect little whodunnit.