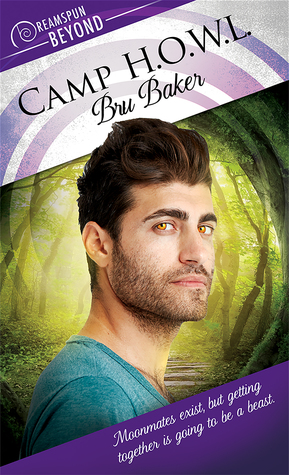 Moonmates exist, but getting together is going to be a beast….
When Adrian Rothschild skipped his “werewolf puberty,” he assumed he was, somehow, human. But he was wrong, and he’s about to go through his Turn with a country between him and his Pack—scared, alone, and eight years late.
Dr. Tate Lewis’s werewolf supremacist father made his Turn miserable, and now Tate works for Camp H.O.W.L. to ease the transition for young werewolves. He isn’t expecting to offer guidance to a grown man—or find his moonmate in Adrian. Tate doesn’t even believe in the legendary bond; after all, his polygamist father claimed five. But it’s clear Adrian needs him, and if Tate can let his guard down, he might discover he needs Adrian too.
A moonmate is a wolf’s missing piece, and Tate is missing a lot of pieces. But is Adrian up to the challenge?
.

I loved Camp H.O.W.L. by Bru Baker. It’s the seventh book in the Dreamspun Beyond series. It’s a standalone book. The story is well written, nicely developed, and has interesting characters. T
his is the first time that I have read a book by this author, but it won’t be the last because it was awesome. This story is a very slow burn which slightly surprised me since Adrian and Tate are moonmates—think fated mates. But Tate has come from an abusive past and pack, and as a result has become a little bit of a hermit while being one of the camp psychologists at Camp H.O.W.L.

He’s also used to helping ease the transition for young werewolves, and part of that transition is for a young werewolf to form a Turn bond with another young werewolf. But when the Camp director gets a call about a werewolf in the hospital that is about to go through the Turn, she sends Tate and another counselor to go and get him before he turns at the hospital. But Tate wasn’t expecting to find a twenty-seven-year-old adult or that he was his moonmate. Because of his upbringing, Tate doesn’t trust his feelings and tries to get the director to pair Tate up with another counselor but Adrian has already formed a Turning bond with him, and so Adrian moves into Tate’s guest room. And for the next month will learn how to control his shifts and work through his feelings for Tate.

For Adrian, this is all new to him. When he skipped his werewolf puberty at nineteen, he assumed he was human. And the five doctors that his mother brought in confirmed it. And for eight years, he has lived with the disappointment from his mother, the Alpha of the Portland pack, and the rest of his pack. So when his birthday rolls around, he makes sure that he is out of town for work, so he doesn’t have to suffer through another birthday celebration that only reminds him of his failure to be a werewolf. So when he doesn’t feel well on his birthday, he only thinks that he’s coming down with the flu, not that he could finally be going through the Turn. And he ends up in the hospital when he passes out on the street.

And he ends up at Camp H.O.W.L. where he finds that he’s attracted to the psychologist that came to get him. Now Adrian will have to learn how to control his shifts and emotions and how to deal with feeling Tate’s emotions and feelings also through their bond.