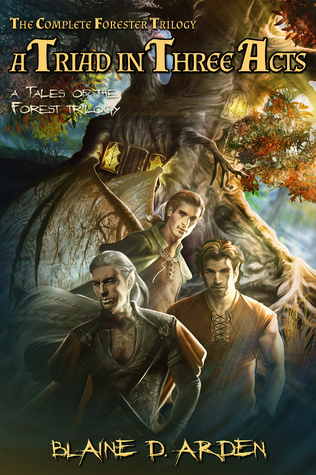 “There is always a way.”
Kelnaht, Taruif, and Ianys are meant to be together, but old promises and the decree of the elders prevent them from claiming each other openly at Solstice. Kelnaht can investigate murder and foul play, but he can’t see how he can keep both his lovers without breaking the rules. But if he believes in the guide’s words and trusts his faith in Ma’terra, they will find a way to clear the fog and puddles from their paths.
The Forester
Kelnaht, a cloud elf, is a truth seeker caught between love and faith, when a murder reveals an illicit affair between two tree elves he desires more than he can admit. Kelnaht’s former lover Ianys once betrayed him, and the shunned forester Taruif is not allowed to talk to anyone but the guide, their spiritual pathfinder.
Lost and Found
A stripling goes missing from the tribe, and heavy rainfall hides all traces of his whereabouts. With days creeping by without a lead, it’s hard to keep the tribe’s spirits up, more so when Kelnaht’s own future depends on the elders. Taruif has been shunned for almost twenty turns, but now that a possible forester’s apprentice is coming of age, the elders consider reducing his sentence. Taruif could be set free.
Full Circle
When several children fall ill with more than a summer bug, truth seeker Kelnaht is assigned to investigate. What he finds is deadly and threatens the life of every underage child in the tribe, including Ianys’ daughter Atèn. Then a wounded traveller is found in the forest, left to die after a vicious attack.
.

I grew up reading fantasy books like Piers Anthony, Terry Brooks, and so many other wonderful fantasy authors and so I was thrilled when I got the opportunity to review a book that has two of my favorite genres combined—Fantasy and all male triads. This book was a joy to read, and since it is the complete series put together, I didn’t have to wait for the next book in the series to come out. And another plus in my book is that I didn’t have to wait until the book was half over to get to the first hot sex scene. I also loved the world that Blaine D. Arden has built for his elves. It sucked me in, and I found myself eagerly reading into the early morning to find out what was going to happen next. The characters were all loveable and unique, and yet they all fit together like puzzle pieces in an intricate puzzle. The author had me rooting for Kelnaht and his former lover, Ianys, and his current object of forbidden desire due to his being shunned, Taruif. Each of the stories has different tasks that the three main characters have to work through before they can get to their happily ever after at the end of the third book.

Kelnaht is a truth seeker and is kind of the private detective of their tribe. He’s also a cloud elf and has wings, so he can fly. One of his abilities as a truth seeker is being able to touch a person to find out what they are hiding and glean the truth. Which sounds cool but in reality, instead of watching what happened, Kalnaht actually experiences what happened as the person he is interrogating. He can also use his magical ability to track while communing with the earth. He also has an apprentice that he’s training to take over his position when he retires.

Ianys is a tree elf and a blacksmith. He was the childhood friend and lover of Kelnaht. However, Ianys wanted kids and so was seeing a female elf at the same time, and Kelnaht didn’t know about her until Ianys left to be her mate when she became pregnant, a stipulation from his baby’s momma since she didn’t want to share him or be in a triad. Kelnaht was heartbroken, but there wasn’t anything that he could do. Another of her stipulations was that Ianys had to promise that Kelnaht wouldn’t be able to raise her daughter if anything happened to her. So even when Ianys became available again later in life, they still couldn’t be together because of the promise. So Ianys found another tree elf to fall in love with although they had to keep their love hidden since the tree elf, Taruif is shunned and is serving a 40 moon sentence for killing his mate.

Taruif is a tree elf and forester. He takes care of the forest and keeps it healthy. He can also talk and feel what the plants are feeling. Because of his abilities, he is only shunned instead of banished when he kills his mate (it sounds like a horrible thing to do but it was what the mate wanted. You’ll just have to read it to understand what happened and why). He’s not allowed to talk to anybody but the guide, their spiritual pathfinder. He’s having a secret relationship with Ianys, but he’s also attracted to Kelnaht and has noticed Kelnaht’s attraction to him also.
When a sapling goes missing, Taruif and Ianys secret affair is brought to Kelnaht’s attention to prove that Taruif didn’t have anything to do with the saplings disappearance. And the three of them will be drawn together again to help find him. And as the guide keeps telling Kelnaht, “Your path is muddy, Kelnaht, but don’t think avoiding the puddles will make it easier to travel.” Kelnaht, Taruif, and Ianys are meant to be together, but old promises and elder elves are keeping them from openly claiming each other during the Solstice. But if he believes in the guide’s words and trusts his faith in Ma’terra, they will find a way to clear the fog and puddles from their paths.

I recommend this book to anybody that loves fantasy books about elves and triad relationships.