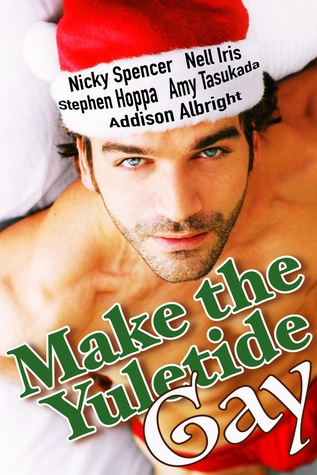 Sleigh bells ring—are you listening?
It’s that time of year again, and we have the perfect way to get you in the mood: A free anthology! Five holiday stories that are guaranteed to warm your heart, heat up your cold nights, and most importantly: Make your yuletide gay.

A Christmas Party to Remember by Nicky Spencer
Last Christmas, Cory and Wes made a connection that left them both thanking Santa. But when Cory doesn’t show up for their first date, Wes swears he won’t make that mistake again. This year, can Santa’s magic find a way to bring them back together?

Let’s Not Go Crazy by Stephen Hoppa
The holidays are stressful enough without Ethan’s boyfriend Nate trying to kill him with Christmas cheer. But Nate’s found a whole new way to torture Ethan when he reveals that he wants kids. Will their conflicting desires tear their relationship apart, or will they find a way to ring in the new year stronger than ever?

Captain Jack and the Snack Attack by Addison Albright
Two men determined to win the same treasure at a charity silent auction, a wayward kitten, grumbling tummies, and a dilemma: what’s the correct gift-giving etiquette for a first date that’s mere days before Christmas, and what could possibly go awry with this merry combination?

The Christmas Day Date by Nell Iris
One rainbow Christmas tree in harm’s way and an afternoon spent eating far too many cookies, equals two men with changed holiday plans. But how does that translate into a date?

The Year of the Monkey by Amy Tasukada
The last thing Aoi wants to do for New Year’s is spend it with his boyfriend’s parents. They were far from thrilled when their son came out. Can Aoi warm their hearts making traditional mochi or will they end up in an even stickier situation?

Authors Note: This anthology is FREE! Do not buy it for $0.99 at Amazon – we are working on fixing that! Currently available for free at Smashwords and soon at all other retailers.

Make the Yuletide Gay is a collection of five short holiday stories by some of my favorite authors and to make it even better the collection is free. So why not take a chance on this cute collection of holiday stories and enjoy the holiday happy feelings that they inspire. I especially liked how this collection was put together. At the beginning of each story is the blurb and at the end, there is a little bit about the author and a few links to some of their other books or social media. It makes it very easy to find more books by the authors if you liked the story that you read or if they had other books with the same main characters like Stephen Hoppa and Amy Tasukada’s stories. They both have multiple books with the same characters that are in the short stories here.

A Christmas Party to Remember by Nicky Spencer – This was a cute story about Cory and Wes who meet at a Christmas party and plan to meet up later for drinks. However, Cory never shows up or responds to Wes’ text messages. Wes vows not to let that happen again. So when Cory shows up again at the same Christmas party and wants to explain what happened the year before, Wes doesn’t want to hear it, but his best friend convinces him to listen to him. How was he supposed to know that Cory had been in an accident on the way to meet him and his phone had been destroyed leaving him no way to contact Wes since he didn’t know his last name or where he worked? There wasn’t a lot of depth or background, but the characters were entertaining and loveable. I would read a longer book about them. 4 OptimuMMs

Let’s Not Go Crazy by Stephen Hoppa – This Christmas story was cute. I haven’t read the other three installments of Nate and Ethan’s relationship yet, but it’s on my to-do list since I found them to be an interesting set of characters. I loved the addition of Ethan’s puppies, but I have only one thing to say, and that’s puppy training classes for the destructive but loveable mutts. 3 OptimuMMs

Captain Jack and the Snack Attack by Addison Albright – Another cute short Christmas story about Kenton and Gordie and the ornery kitten, Captain Jack. Kenton and Gordie don’t get off to the best start when they both bid on a signed Captain Jack Sparrow movie poster at a silent auction at a charity ball fundraiser. And even though Gordie was outbid in the end by Kenton, when they run into each other again it won’t stop Gordie from going out on a date with him. However, when their first date is derailed by the disappearance of Kenton’s kitten, aptly named Captain Jack, the men make the best of a silly situation and have a night in at Kenton’s place while they look for the kitten. 3 OptimuMMs

The Christmas Day Date by Nell Iris – Awe, I loved this short holiday story about Julius and Lenny. I would love to read more about them and their next date. I loved how bubbly and emotional Julius is and how honest Lenny is about his past. And the make-out scene was hot! 5 OptimuMMs

The Year of the Monkey by Amy Tasukada – I enjoyed getting to see Aio and Sato as they celebrated New Year’s Day with Sato’s family. Aio is a mess of anxiety and nerves over Sato’s parents not liking him, and so he decides to make homemade mochi. I loved getting to see how they make mochi and how much work it is. 4 OptimuMMs