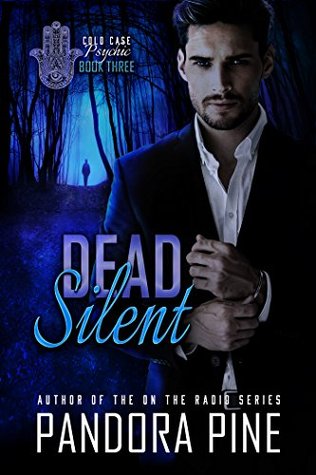 After a dramatic end to the Justin Wilson case, Psychic, Tennyson Grimm heads to a small island off the coast of Maine, hoping to clear his mind and renew his spirit. When the dead won’t let Tennyson rest, the psychic curses his gift and orders the spirits to leave him. He wakes the next morning to silence, and finds truth in the saying, “Be careful what you wish for.”
Detective Ronan O’Mara has been tasked by his boss with the chore of finding a more “sedate” cold case to investigate this time around. The handsome cop is only too happy to oblige. He chooses the twenty-year-old case of a family patriarch who was murdered on Christmas night, 1997. The only possible suspects are either his wife or his daughter, who were both with him at the time of his death. Ronan figures this one will be a piece of cake. All he has to do is get his favorite medium to talk to the deceased man’s spirit.
When Tennyson reveals the truth about what happened in Maine, he’s forced to take a hard look at who he thought he was, and what his gift really means. Ronan does his best to help his lover cope with his new normal while he uses good old-fashioned police work to figure out a family who put the ‘dis’ in dysfunction.
Will Tennyson be able to find the key to unlock his gift, or will the spirits stay dead silent?

After their last case with the serial killer who attacked young homeless gay boys, Tennyson needed time for himself. He goes on vacation to Maine alone. But when he spends all his days trying to help more spirits, Tennyson lost it, and yells at the spirits before wishing to never have his gift. When he wakes up the next day, it was dead silent, no spirits, no voices, nothing—Tennyson lost his gifts.

Ronan wishes to be with Tennyson but understands the need for his man to be alone, so he tries to find a “boring” case, a case without Tennyson or him being shot, kidnaped or beat. He’s happy to find a “simple” murder case and can’t wait to have Ten back with him to resolve the case.

Tennyson is scared and lost, for the first time since he was thirteen, he feels truly alone, and afraid that Ronan, Carson, Cole, and Truman may reject him now that he isn’t special anymore.

For the first time in his life, Tennyson will have to count on only himself, without his gifts.
I loooooooved this book like I love the others.

Tennyson and Ronan are just amazing.

Tennyson is completely lost and scared, losing his gifts and having to be “blind” at work with Ronan, is hard for him. I discovered the insecure Tennyson, the one who believes that no one will love him now he’s “normal”. I was sad for him, sad to understand that he never had a real life since he’d gotten his gift at thirteen, but he can count on Ronan’s unconditional love.

Ronan was there for Tennyson, even if he doesn’t know how to help him, he tries everything he can to help him relax, find peace and find a way to have his gifts back. Even without Ten’s abilities, Ronan refuses to work without him, and they have to rely only on their investigators’ skills this time.

Of course the gang was there too, and we learn a little bit of information about them, especially Captain Fitzgibbon, and I just hope that he’ll have his own book.

This book is a good addition to the series, after their difficult beginning, Tennyson and Ronan needed to reconnect together, not only Tennyson with himself, but also with Ronan, and this book is exactly that, how they reconnect as a couple.
The case wasn’t as horrible as the previous cases this time, but I admit that Pandora makes sure that until the end, we can’t find who did it.

I highly recommend this book and the entire series. Tennyson and Ronan are worth it.