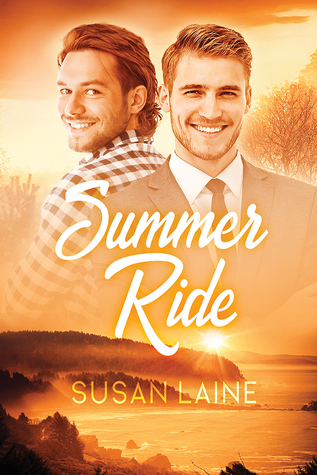 High school best friends Toby Billings and Jim Maverick went their separate ways after graduation. Five years later, they meet by chance. Toby needs a ride, and Jim offers to give him one.
During a journey across several states, with stops at roadside diners, state parks, and cheap motels, small talk turns to serious discussions of lives that didn’t turn out the way either of them dreamed. Their choices are catching up to them, and neither is on an innocent summer vacation. Renewing their friendship will mean painful admissions and secrets coming to light. Yet they discover they have more in common now than they ever guessed, and going their separate ways at the trip’s end won’t be easy.
After aimlessly wandering the country, all roads lead back home. But first they must decide what home means.

Summer Ride was a cute little friends to lovers story that had me laughing out loud at times, but also needing a cold shower at others. It’s a story that definitely kept me entertained and stimulated throughout.

Toby and Jim were best friends in high school, but since graduation, they haven’t seen or spoken to each other at all. Now aged twenty-three, they meet out-of-the-blue at a bus station where Toby was waiting and that Jim just happened to stop at while passing in his car. When the two men connect again and discuss what they’ve been doing with their lives and where they’re heading, Jim offers Toby the chance to join him on his journey, even though neither of them has a plan as to where they’re actually going. Along the journey, they discuss their memories and fall into the comfortable and easy relationship they once had. But there’s one big difference between now and when they were teenagers. Both of them are now out and proud gay men, even though they don’t know/realise it about each other. When they talk about their reasons for escaping their lives for however long they’ll be staying on the road, they discover that their lives aren’t as perfect as everyone would believe. And if they have any chance of being happy in the future, then they’re going to have to head back home and face up to their problems. But as the attraction and lust grow, and feelings of more than friendship develop between them, parting again isn’t going to be as simple or painless as they thought.

I really enjoyed this book. It was well written and had a good pace and flow. The characters were very likeable, and I couldn’t help forming an attachment to them. Toby and Jim also made a great couple. There was a lot of chemistry between them which I think was mainly due to their close friendship. An extra bonus was that it meant the sex between them was pretty damn hot too. All I’ll say is be prepared for chapter twenty and the dirty talk; you may need a few minutes to get yourself together before continuing. *wink*

My only criticism of the story is that some of the vocabulary used didn’t feel like it fit with the characters. Toby and Jim didn’t come across as being only twenty-three. Even though I knew that was their age, I couldn’t help but think of them being a lot more mature. I would put them more at late twenties to early thirties. So when they called each other “bruh” it just seemed awkward and out of place. But it really is only a small issue and may not bother you as much.

This book is perfect for when you’re having a lazy day and want a good story, but not something that’s heavy with emotion or angst. I would definitely recommend it because there’s a pretty high chance I’ll be reading it again myself.