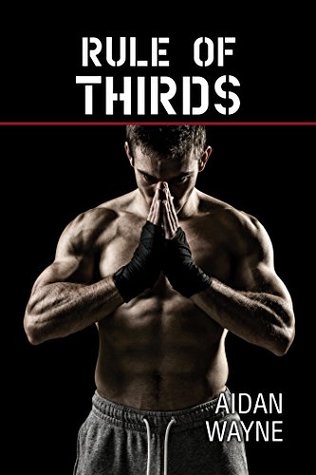 A traumatic past doesn’t have to mean not having a future.
When Jason Diovardi, military elite, is removed from active duty after failing too many psych evals, he has only one goal in mind: get back into the field. It’s all he knows and all he thinks he’s good for, which is why he grudgingly accepts two live-in AI Companions to help him begin to recover from his severe PTSD. Chase and Shade are a matched pair, and Jason hopes they’ll keep each other distracted enough to leave him alone so he can go through the motions and be cleared for fieldwork.
Jason doesn’t expect to actually get better, and the progress he makes with his patient and caring Companions sneaks up on him—and so do unexpected feelings between the three of them. Now Jason might even be able to admit to being happy. But has he healed enough to allow himself to accept what Chase and Shade are offering?
Hope. Love. A reason to live.

I loved Rule of Thirds by Aidan Wayne. This is the first time I have read a book by Aidan Wayne, but it won’t be the last. The author sucked me in with the blurb and the yummy cover, and the story didn’t disappoint. I was hooked from the first line and read the story straight through into the wee hours of the morning. The story is about Jason Diovardi who is a military elite that has been removed from active duty after failing too many psych evaluations. He has PTSD and part of his recovery is being assigned a live-in AI Companion. The only thing on Jason’s mind is to go through the motions and be cleared for fieldwork.

In this futuristic world, Artificial Intelligence has evolved into independent sentient beings, and a lot of them have been trained as live-in caregivers or special-needs assistance companions for people who have PTSD. For Jason, this means somebody that will help him with his touch aversion and lashing out at people and hurting them when he’s startled or having a flashback and also making him meals and making sure that he eats and goes to his appointments. During his appointment with the Delegate for the companions, Jason finds out that there is a bonded pair which matches his needs. Jason hopes that if he takes the matched pair that they’ll keep each other distracted enough to leave him alone so he can go through the motions and be cleared for fieldwork.

Chase and Shade are a bonded pair of Companions. However, during one of his companion assignments, Shade had gotten reprogrammed into thinking and acting like a loyal dog. Chase was his savior, and they ended up bonding over the incident and recovery. Shade will never be like he was before the tampering with his programming but Chase loves him for who he is now not who he used to be. With Shade’s enhanced abilities like hearing, sense of smell, and empathy, he is able to read Jason’s body language and feelings that he keeps hidden. Which really helps with his recovery. As they help Jason with his recovery and he starts to open up and work through his issues, Chase and Shade end up falling in love with Jason, and they want to propose a permanent human-android bond.

But as Jason gets better, he’s given more duties from his work like training recruits and getting them ready for fieldwork. Which puts him closer to his goal, going back into active duty. But now that he has two people that he cares about, he isn’t sure if risking his life again in active duty is what he wants to do anymore. Will he choose active duty or the loves of his life?
This story was a great look into the mind of a man who has PTSD. I liked getting to see how he sees himself and why he does some of the things that he does. I also loved Chase and Shade and how they didn’t pressure Jason to do anything but just became a part of Jason’s life and snuck into his heart. I hope that the author writes more books like this one. I would love for this to become a series.