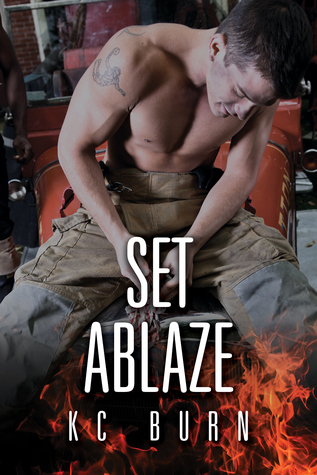 California firefighter Hayden Hurst is starting to realize there’s more to life than fighting fires and drinking with his buddies. He has room in his home and his life for someone special, but no one has stood out among his hookups. And while he’s out at work, admitting he’s gay is very different from showing up at social functions with a man. He’s afraid that’ll be too much for his less-than-accepting “friends.”
Broadway dancer Jez Bouchet hasn’t been mistaken for straight since he was gay-bashed at seventeen. After getting a lucrative job offer in Hollywood, he uproots his life in New York and drives to Los Angeles. His brother, who is Hayden’s best friend, arranges for him to crash at Hayden’s place.
The attraction between Hayden and Jez is unexpected but fiery, and they succumb before they’re even sure they like each other. But Jez hates Hayden’s homophobic friends, and Hayden knows Jez is too flamboyant for him to fly under the radar. Then there’s the complication of Jez’s brother.
Despite those hurdles, they fling themselves into a relationship. But Jez has secrets: a tiny spoiled dog and a determined stalker. If he doesn’t come clean, he might torch their burgeoning relationship before it has a chance to bloom.

Hayden is a California firefighter, gay, practically out, who shares his life between his work and his buddies.

Jez is a Broadway dancer who came to live in California to start his life over. His brother, Miguel, asked his best friend Hayden to host Jez while he searches for somewhere to live.
Even if Jez and Hayden had known each other all their lives, after a decade without any contact, they’re like two strangers. The fact that Jez has two big secrets, one named Fang a little pug puppy and the other a stalker, doesn’t help at first, and worse, the strong physical attraction between them complicated things a little bit.

I liked this book. I had a good time with them.

Hayden is gay, his parents had threatened him with conversion therapy when he came out, and he ran away to live with his grandmother. But even if Hayden is gay and out, he lives in the closet…let me explain. People at his work know he’s gay, but he never brings a boyfriend to their gatherings, never talk about his life, and when his so-called buddies are homophobic, he doesn’t say a word, and thinks it’s just jokes. He lives in a closet. But when Jez came into his life with his unicorn t-shirt and his flamboyant temper, he realizes that maybe something is wrong with his friends. Jez shows him that he doesn’t have to live a half-life.

Jez is my favorite. I like him a lot. He had a traumatic past after a gay-bashing at 17 years old, and his family had turned their back to him… Except his big brother Miguel. He was on his own, healing his body, soul, and mind. He’s refused to be mistreated since, and when he meets Hayden’s homophobic friends, he refuses to shut up. Besides, Jez has a creepy stalker who make his life hell, but with Hayden’s love and support, he starts to take back what belongs to him.

KC Burn wrote a sweet book with a good plot. She tackles difficult subjects, but she transforms them into a beautiful message of hope that no matter what people think of you, you’re still in control of who you want to be.

Jez and Hayden were adorable together, sweet and funny. The only thing that I missed a little bit was the absence of sex scene, I would have loved to read at least their first night together.