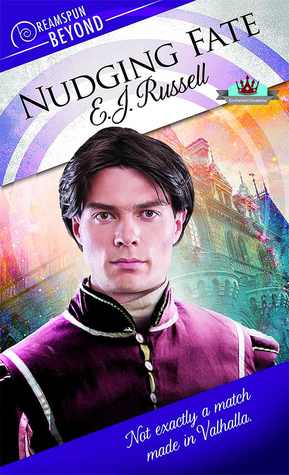 Not exactly a match made in Valhalla.
Half-norn event planner Anders Skuldsson is under strict orders from Asgard not to meddle with Fate. But with Enchanted Occasions’ latest booking—a competition for the hand of Faerie’s one true prince—crashing around his ears, it’s really difficult to toe that particular line. But if Andy pretends to be a contender for the prince…. It’s only temporary, so Odin can’t blame him. Right?
Conall of Odstone’s half-brother, Prince Reyner, was supposed to choose a mate before being crowned and wed. But the idiot left Con to impersonate him. Again.
When Con meets Andy, his anger turns to desire… and despair. Even if Andy forgives him for his imposture, how could someone eligible for a prince’s hand settle for the court outcast? And the double-deception isn’t their only obstacle. Unless Andy makes the right choice, their fates could be sealed by…well… Fate.

Nudging Fate is the first book in the Enchanted Occasions series by E.J. Russell and the twentieth book in the Dreamspun Beyond series. For me, this book was a collection of all the pieces making the book the success that it was. You know how some books only focus on the main characters and then there are the supporting characters that sometimes enhance a story. Well with this book I loved the supporting characters just as much as I loved the main characters and I don’t think the book would have been as entertaining without them. I do have to say that I wasn’t expecting what happened at the end of the book, but I loved how the book was resolved.

Anders Skuldsson is Half-norn (half human-half paranormal or as the purebloods call them aitchers), event planner who is related to the big three, the Norns who tended Yggdrasil, who have forbidden him from interfering with fate. However, if he’s caught nudging fate, then he has to answer to Odin and return to Asgard. He works for Enchanted Occasions and has a whole staff of half-norns. After a mishap with their last event, they haven’t been hired in over a year. Then the Faerie Queen hires Enchanted Occasions for the Courting, Coronation, and Handfasting of his Royal Highness Reyner of Maidencourt, the One True Prince of Faerie and specifies that Andy is to be the person in charge. Andy will do anything in his power to make the event a success. And he will be tested at every turn with the special requests and limitations made by the candidates for being the Prince’s Consort. When something happens that makes all of the candidates indisposed for the first date with Prince Reyner, Andy does the only thing that he can think of—he pretends to be one of the candidates and goes on the date with the prince. He had no idea that the prince would be so handsome and that they would have such powerful chemistry. It’s only supposed to be one time, but circumstances keep pushing them together, so what’s an event planner supposed to do? You’ll have to read it to find out.

Conall of Odstone is the half-brother of Prince Reyner, but his life has never been as easy or fun as his half-brother’s life. Conall is a half-norn, which means that he is pretty much beneath anyones notice and makes him the court outcast. He’s the product of the Faerie Queen’s consort and the court herbalist. Conall and Reyner were conceived on the same day, born on the same hour, and named in the same ceremony. Although Reyner’s naming day gifts of charm, wit, and beauty were a far cry to Conall’s inconvenient gift of responsibility. However, he wouldn’t even have gotten that one if it wasn’t for a wand’s misfire.

Conall did get three things out of his birth, his mother, Reyner, and Talus (an old world Knight made of squeaky Iron who will make you laugh). With the help of a spell, Conall can look like his half-brother and impersonate him and go to the functions that Reyner doesn’t want to go to. Which just happens to include the event that his mother has planned. Reyner is supposed to pick out his consort from the candidates that his mother has picked, but as Reyner is a bit of a playboy and has already slept with all of them except for one, he tells his brother just to pick whichever one he wants. Reyner doesn’t care since he doesn’t love any of them and doesn’t have much of a choice. So posing as the prince, Conall goes on his dates, but he isn’t expecting to be so attracted to the candidate, Andy. Conall didn’t plan on falling for Andy and even if Andy forgives him for his imposture, how could someone eligible for a prince’s hand settle for the court outcast? And unless Andy makes the right choice, their fates could be sealed by, well, Fate.

I can’t wait to read more books in the Enchanted Occasions series. And I still haven’t been disappointed yet by any of the books in the Dreamspun Beyond series.