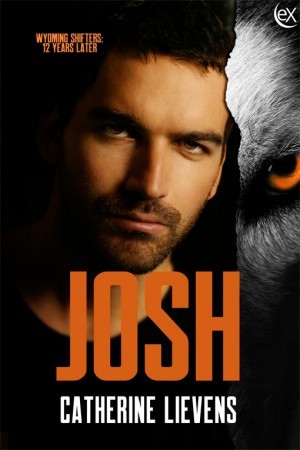 Josh has been avoiding his mate, Brian, since they first met twelve years before. He had good reasons at first—he was only sixteen and had just lost the only family he’d ever known—but he knows he can’t continue to stay away, not if he doesn’t want to lose Brian for good.
Brian has been patiently waiting for Josh to get over whatever his problem is, but he knows he can’t wait forever. He loves Josh, has loved him for years, but he doesn’t want to live his entire life waiting for him.
Josh finally decides it’s time to talk to Brian and come clean, no matter how scared he is of rejection. Of course, that’s when his biological mother appears in his life. As if that wasn’t enough, Brian finds out his father has cancer. Will the complications push Brian and Josh apart, or will they bring them together?

Josh is the third book in the Wyoming Shifters: 12 Years Later series by Catherine Lievens. I liked this book better than the second book in the series, Ned.
However, it did remind me a lot of the first book in the series, Asher. Both Asher and Josh had shifters that had met their mates while they were in their teens and decided not to tell their human mates about it until over a decade later. Both books were filled with the shifters indecision on whether or not to claim their mates or if they would be better off without them. Both books the human mates know that the shifters are their mates but the shifters aren’t aware that they know and that they are just about done waiting for them to get their acts together.

I have noticed a theme with this series that the author has made them very light on chemistry and passion and the books usually only have one sex scene which is usually only oral or rubbing. It tends to fit with how much chemistry is in the books. The endings are also more of an HFN ending, which would be fine, but each book in the series is about a new fated mates couple and so unless they have cameos in the next book you really have no idea how their relationships are going. I think the series would benefit from having a background arc that brings all of the books together like they are all fighting a common enemy or event that could bridge the series. Otherwise, these books are really a standalone read but without having the epilogue to tie up all of the questions that we have about what happens later in their relationships.

This book is about Josh and his human mate, Brian. Josh knew that Brian was his mate from when they first met twelve years before and he’s been avoiding him ever since. At first, he had a good reason, he was only sixteen, and he had just lost the only family he’d ever known. However, he knows that he can’t continue to stay away, not unless he wants to lose Brian for good. Josh doesn’t know that Brian has known this whole time that Josh is his mate and has been patiently waiting for Josh to claim him. But twelve years is a long time, and at some point, you have to give up and move on. Josh finally does find the courage to tell Brian that he is his mate, but instead of finally being able to work on their relationship, Brian gets a call from the hospital that his foster father is in the hospital with cancer and may not have long to live.
Brian is shocked since he was unaware that his dad had been sick. Brian had been moved around from foster family to foster family as he was growing up, but the family that he connected with the most was his foster father, Leo, who he stayed with for four years until Leo’s wife divorced him and Brian had to go back into the foster system. With the help of the pack, Brian is able to get his father moved to Gillham and seen by the special healers that the pack has. Will they be able to save Brian’s father? You’re just going to have to read the book. And then another complication comes into their relationship when Josh’s biological mother appears in his life. Naturally, Josh wants nothing to do with her and for a good reason. Overall, this book is a much better addition to the series than the second book, and I would have given it a five-star rating if it didn’t remind me so much of the first book in the series.

I can’t wait to read the next book in the series.