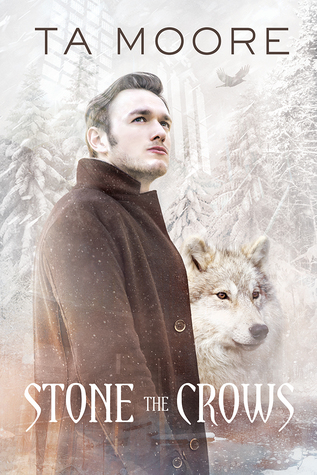 When the Winter arrives, the Wolves will come down over the walls and eat little boys in their beds.
Doctor Nicholas Blake might still be afraid of the dark, but the monsters his grandmother tormented him with as a child aren’t real.
Or so he thought…until the sea freezes, the country grinds to a halt under the snow, and he finds a half-dead man bleeding out while a dead woman watches. Now his nightmares impinge on his waking life, and the only one who knows what’s going on is his unexpected patient.
For Gregor it’s simple. The treacherous prophets mutilated him and stole his brother Jack, and he’s going to kill them for it. Without his wolf, it might be difficult, but he’ll be damned if anyone else gets to kill Jack—even if he has to enlist the help of his distractingly attractive, but very human, doctor.
Except maybe the prophets want something worse than death, and maybe Nick is less human than Gregor believes. As the dead gather and the old stories come true, the two men will need each other if they’re going to rescue Jack and stop the prophets’ plan to loose something more terrible than the wolf winter.

Stone the Crows is the second book in the Wolf Winter series by TA Moore. I liked this book much better than the first book in the series, Dog Days. It did start off slow, and it took me about thirty percent of the book to figure out what was going on and become invested in the book. I did have an easier time connecting with the characters in this book and the author even got me to cry a couple of times.

I loved Jimmy. He’s a supporting character, but he was one of my favorite supporting characters. He was one of the children that were rejected for transfer to the big city because he had leukemia and had a low survival rate. I also liked his dad who was the sheriff. He made questionable choices in the book, but he did them for the right reason, trying to save his son’s life. I was happy that Jimmy survived all that happened to him and I hope to see more of him in the next book. I also liked that I was able to connect with the main characters, Gregor and Doctor Nicholas Blake. I liked the interactions and chemistry between Nicholas and Gregor, and I became invested in their relationship. I liked that Gregor doesn’t treat Nicholas as a lesser being just because he happens to be human.

I like how Nicholas starts out seeming like a minor character with not a lot of important duties (he gets to record the dead so that they can be identified by family members later on). He’s used to working in the morgue and doesn’t have the best social skills when forced to interact with his fellow doctors. He grew up with a harsh grandma that filled his young head with stories about gods, prophecies, and monsters—of Wolves that will come down over the walls when winter arrives and eat little boys in their beds. How was he to know that the monsters his grandmother tormented him with as a child were real? But when he finds a half-dead man bleeding out while a dead woman watches, he starts to believe. Now his nightmares are encroaching on his waking life, and the only one who knows what’s going on is his unexpected patient.

I also liked Gregor. Between Gregor and his twin brother, Jack, he’s supposed to be the bad twin, but I actually like him more than Jack. But Gregor has lots of challenges in this book. The main one which will affect his getting his brother back is that the treacherous prophets mutilated him and stole his wolf half. He still has his faster healing ability and his connection to the Wild, but he no longer has the ability to change into his wolf. But he is determined to get his brother and his mate back from the prophets.

I’m still not sure how Gregor wasn’t captured with his brother and his mate. It was probably in the first part of the book when I was trying to figure out what was going on. I also wasn’t sure why the prophets were using skin grafts to make their monsters instead of just biting them like they had in the first book maybe it will be explained more in the next book. Maybe each prophet has their own way of making their monsters. I don’t know.

I do know that there are lots of twists and turns in this book and most of them I didn’t see coming. And now that I’m invested in Gregor and Nicholas, I can’t wait for the next book to come out so I can find out what happens on their journey to the Numitor and what happens to the prophet that got away.