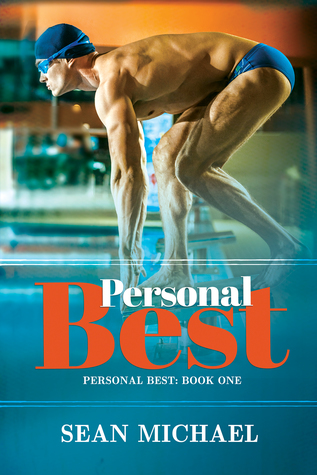 Mike Gauliet could be a world-class swimmer if he took better care of himself. He’s too good to let go, so his team coach calls in a private trainer, up-and-coming hardass Jessy Turner. Jessy locks Mike down, putting him on a strict regimen of diet and exercise that Mike resents a lot until he realizes the changes are making him a better swimmer.
Jessy finds Mike all but irresistible but keeps his distance and remains professional, focusing all his attention on what’s best for Mike and his career. The two of them resist their attraction to each other for as long as they can, but eventually they have to give into the heat between them.
When things go wrong, though, can they, and their sports careers, survive the strain?

Personal Best is the first book in the Personal Best series by Sean Michael. I liked this book. When I was growing up, I was on a swim team in elementary school. I was always envious of the kids that could dive into the water and keep their goggles in place. Mine always rolled down and so I would have to do the swim meets without goggles to protect my eyes. I can remember how much my eyes would sting from the chlorine that was added to the water by the end of the meet and being a natural blonde my hair was always tinged green. But I loved being part of the team and learning how to do the flip kicks off of the walls and how to do all of the different strokes properly. I kind of wish that I had kept doing it, but I didn’t have the natural talent to compete. Maybe if I had Mike’s natural talent and a private trainer like Jessy, I would have stuck with it. This book had a great plot and plenty of sex scenes to go with it. If you are looking for a book that is plot heavy with only a little bit of heat than this book isn’t for you. However, if you like your books on the explicit side with just enough plot to link the steamy scenes together than this book is for you.

I liked Mike. He has natural ability and a great attitude to go with it. His parents were also Olympic swimmers, but he lost them in a boating accident when he was young and went to live with his aunt. He’s now in college on a full scholarship. He’s been swimming for as long as he can remember. He has a lot of excess energy, and he uses swimming as an outlet for it and when he can’t sleep. His swim team coach can see his potential and calls his friend Jessy Turner, an up and coming hardass private trainer. Jessy restructures Mike’s life and cuts down on his classes so that he can focus on his swimming. He also puts him on a strict regimen of diet and exercise that Mike resents until he realizes that the changes are making him a better swimmer. I would have issues if somebody took away my chocolate, caffeine, and junk food also.

I also liked Jessy. He has a no-nonsense attitude that hides how much it hurts when his students end up leaving him. He finds Mike irresistible but tries to keep his distance and remain professional by focusing all of his attention on what’s best for Mike and his career. The two of them try and resist their attraction to each other, but it really is a losing battle. They just have way too much chemistry to stay apart and living together doesn’t help the situation any.

When a party leads to a misunderstanding, will their relationship and their sports careers survive the strain? You’re going to have to read the book to find out. At the end of the book is a preview of the next book in the series and it sounds really good.

I can’t wait for it to come out so that I can read it.