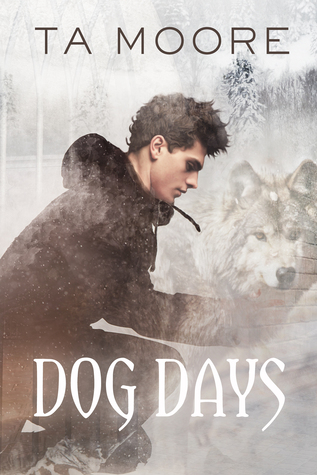 The world ends not with a bang, but with a downpour. Tornadoes spin through the heart of London, New York cooks in a heat wave that melts tarmac, and Russia freezes under an ever-thickening layer of permafrost. People rally at first—organizing aid drops and evacuating populations—but the weather is only getting worse.
In Durham, mild-mannered academic Danny Fennick has battened down to sit out the storm. He grew up in the Scottish Highlands, so he’s seen harsh winters before. Besides, he has an advantage. He’s a werewolf. Or, to be precise, a weredog. Less impressive, but still useful.
Except the other werewolves don’t believe this is any ordinary winter, and they’re coming down over the Wall to mark their new territory. Including Danny’s ex, Jack—the Crown Prince Pup of the Numitor’s pack—and the prince’s brother, who wants to kill him.
A wolf winter isn’t white. It’s red as blood.

Dog Days is the first book in the Wolf Winter series by TA Moore. I put in a request to review the second book in the series Stone the Crows, but I figured that I should read the first book in the series first. I love the cover of the book. It’s beautiful, and the cover artist did a fabulous job. I would have bought the book based just on the cover without even reading the blurb; however, after reading the book, there should definitely be blood somewhere on the cover.
The cover is misleading. This book is not a romance. There is sex in the book, but it’s more of—we used to have a relationship, but we broke up, but I’m still attracted to you, so we have sex occasionally type of thing. The story does have twist and turns, some I could see coming and some I didn’t. I was kind of hoping for an urban fantasy romance, and I got an urban fantasy horror story. I was also disappointed in the editing of the book. I don’t normally find errors in books published by Dreamspinner Press, but I found a few and even a wrong name used.

Danny left his pack because to him it felt confining, clannish, and frequently cruel. Danny is a weredog and in the hierarchy of a werewolf pack that puts him at the very bottom. Also by being a dog, he doesn’t feel the wild the same way that the wolves do and doesn’t need or desire a pack the same way that they do. Danny would rather live in the human world with the humans, dating humans, teaching humans, basically acting human. He’s a teacher and lives in the same apartment building as his ex-girlfriend, Jenny, and her new boyfriend that she cheated on him with. Despite that, they are still good friends. I liked Danny, but I was a bit confused by how his character was portrayed. Multiple times Danny says that he’s really good at running, away from his pack, his problems, and more. The whole book all he does is refuse to run away and runs after his ex, pulling her out of situations, helping her when Jack wants him to do something else, pretty much putting her first in every situation. And it seems like his whole motivation is out of not being able to love her as he should have and having hurt her when they broke up, which is odd since she was cheating on him, but whatever.
He was like a dog with a bone, the world is freezing over and ending, the monsters are coming, you can’t travel anywhere, there is limited food, no heating, but his whole focus is around Jenny. In my opinion, if Jack had been smart, he would have killed her when he saw how Danny was around her the first time. It would have saved them a lot of trouble. But you know hindsight…

Jack is the prince pup of the Numitor. They are the be all end all of werewolf packs. They are so purebred that they would rather breed with real wolves than dilute their blood by breeding with humans. So obviously they have a superior attitude to humans. Jack has an identical twin, Gregor, that was born twelve minutes after him. The Numitor, their father, has to pick an heir and Gregor gets it by default, not because of his fighting ability or leadership but because Jack refused to sleep with females and a male that refuses to breed can’t be the next Numitor. And so he is exiled. The story jumps a period of time, and suddenly Jack is in the same town as Danny, who supposedly had a sexual thing with Jack while they were in the pack together. I kind of wish the author had put up a timeline a month date type of thing at the top of the chapter to help with figuring out how much time had passed since Jack had gotten exiled and found Danny. It would have been helpful. I didn’t really like Jack. He treats Danny like a pet/possession. He refuses to tell Danny why he’s there or what he wants. I just couldn’t connect with him or how he interacts with Danny. I liked how he interacted with his twin though, even if his twin is trying to kill him, although that is mutual.

I did like the description of the prophet and the monsters. I didn’t have any problem getting a visual picture of them. The author also did a good job of describing the town and how the weather affects the characters. Although with how cold and miserable it was I was surprised how easily the humans were able to move around without freezing.

Overall if I was looking for an urban fantasy horror story than this would have hit the spot but it just wasn’t what I was looking for.
I’m hoping that I will like the next book in the series better since it’s about Gregor, Jack’s twin.