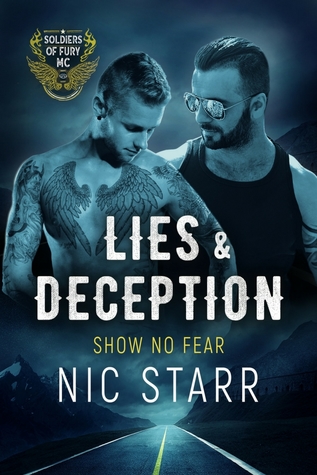 Detective Mitch O’Neill is the ideal man to infiltrate the Soldiers of Fury Motorcycle Club. His ex-boyfriend, Peter, is pledged with the club, which provides Mitch with the perfect cover. Despite the relationship ending badly, he’s come to terms with Peter’s drug addiction and his inability to help. All Mitch wants now is to bring down the Soldiers and the club president, Rocky Cummings, once and for all.
Finn Cummings hates everything the motorcycle club stands for, but he’s unable to escape his brother’s clutches. When Mitch is assigned as Finn’s driver, they spend countless hours together, and the saying proves true—opposites do attract. Finn agonizes over his feelings for Mitch—the last thing he wants is to involve himself further with criminals, not when he wants to leave that world. Mitch tries to come to terms with falling for a member of the outlaw club he’s determined to destroy.
If they can survive the fallout from Rocky’s violence and the investigation, they might discover it’s not a case of opposites attract after all.

As far as mystery and suspense books go, this one was top-notch. Nic Starr did a great job with character and plot development. As soon as I had a question about how the plot could go in a certain direction while still making sense, it inevitably worked out. The beginning didn’t grab my attention at first, and I found myself getting sidetracked. As I continued, however, the book really had me captivated.

Detective Mitch O’Neill was an intriguing character. He finds himself in a bit of a predicament when his ex is a member of a gang he’s been assigned to bring down. With this new development, he decides to take a chance and go undercover to not only infiltrate the gang but also find out what his ex is doing with such a rough crowd. Infiltrating a gang where a member knows you’re a cop could only spell disaster, but luckily his ex, Peter, is smart enough to follow along. Gaining the club president Rocky Cummings trust proves to be a difficult task and he soon finds himself as the chauffeur/bodyguard of Finn Cummings, Rocky’s younger brother.

Finn Cummings wants absolutely nothing to do with the biker gang his family has been a part of for generations. In fact, he’d love nothing more than to see it all crumble apart and he’s determined to help it along. He left for Uni in order to separate himself from his family’s legacy and find his own path in the world. Unfortunately getting his education in accounting has caused his older brother to pull him back into the life he’s so desperate to leave behind. Finn decides that if he’s ever going to have his own life away from his brother’s control, then he needs to do whatever it takes to help bring it all down and it starts with him sending information to the task force Mitch O’Neill is assigned to. As these two come together, unknowingly for the same reasons, sparks fly. But can they trust each other enough to stoke the flames?

I really enjoyed how the story progressed and the slow burn between the MCs. It may have been an instant attraction but it wasn’t instant love, and that was refreshing. The book keeps a pretty fast pace after about the halfway mark, so you’ll definitely want to do a solid read through. This was my first book by this author and definitely not my last.