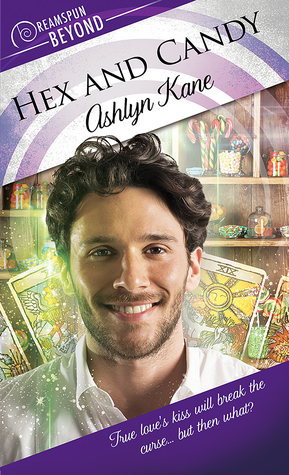 Strange Bedfellows
True love’s kiss can break the curse. But then what?
Cole Alpin runs a small-town candy store. He visits his grandmother twice a week. And sometimes he breaks curses.
Leo Ericson’s curse is obvious right away, spiderwebbing across his very nice body. Though something about it worries Cole, he agrees to help—with little idea of what he’s getting into.
Leo is a serial monogamist, but his vampire ex has taken dating off the table with his nasty spell, and Leo needs Cole’s companionship as much as his help. When the hex proves to be only the beginning of his problems, Leo seeks refuge at Cole’s place. Too bad magic prevents him from finding refuge in Cole’s arms.
Cole’s never had a boyfriend, so how can he recognize true love? And there’s still the matter of the one responsible for their troubles in the first place….

Hex and Candy is the first book in the Strange Bedfellows series and the twenty-sixth book in the Dreamspun Beyond series. This is the first book that I’ve read by Ashlyn Kane. The book was well written, and I liked the plot. The characters and sub characters were interesting, but the editing could have been better, although it wasn’t too distracting. I liked that this was a book about Cole, a candy maker curse breaker who takes on a client, Leo, who believes he’s been cursed by his vampire ex-boyfriend, Roland. The curse doesn’t allow him to flirt, exchange numbers, or dance with anybody that he’s attracted to. Leo was referred to Cole by a friend.

I was sometimes confused by the main character Cole Alpin. Cole comes from a long line of witches, but while he was growing up he didn’t present a magical ability, so they thought he was a muggle—yes, they did start to call humans that after the Harry Potter books came out.

Up until that point, they were called mundane—so they had him learn a muggle job, and he choose candy making but not chocolate because he has a really bad hazelnut allergy. However, Cole did finally get his magical ability which is curse breaking. So now he has a candy shop where he makes some holistic magical candies in addition to regular candies and on the side he breaks curses. Coles’ grandmother is clairvoyant, and he’s asked her before if he will ever find somebody to love, but she will never tell him yes or no. His cousin Kate also has a way with tarot cards and reads his cards whenever he has a question about what he should do. Now the part that confuses me is how Cole keeps having thoughts about not be able to do something or say something because it is too sexy which is the same problem that Leo has because of his curse. Which keeps making me think that he’s the one that’s cursed which is wrong. If he’s trying not to say or do these things because it would be unprofessional to hit on his client, then it wasn’t explained well enough cause I found it confusing.

I did like how true love’s kiss could break the curse.

I liked Leo Ericson. His first introduction into the paranormal world is when he takes home a one-night stand that turns out to be a vampire. After their relationship dissolves in what Leo thought was amicable terms, he finds that he’s been cursed. And he’s pretty sure it was by his ex-boyfriend. After nearly a year of living with the curse, he’s ready to be done with it and is recommended by a friend to Cole Alpin.

I liked that there were some twist and turns that I wasn’t expecting and that we still got a happily ever after ending.
Overall, a good book and a good addition to the Dreamspun beyond series.

I can’t wait for the next book in the Strange Bedfellows series to come out.