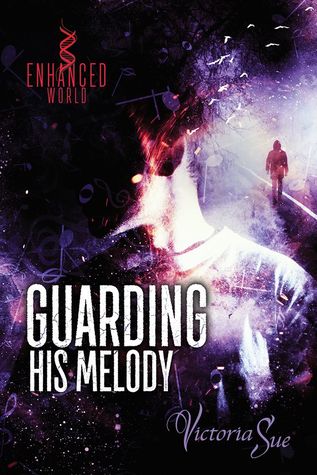 A standalone in the Enhanced World
Deaf since childhood, Sebastian Armitage had a promising musical future until his dreams were shattered when he transformed at twelve years old. In a world where enhanced humans are terrorized and imprisoned, his life shrinks around him even more as he suffers the torment of his father’s experimental research to enable him to hear.
Gray Darling—struggling with the scars left by his experience in Afghanistan—agrees to provide short-term personal protection when anonymous threats escalate into assault on those closest to Seb.
As the lines between protection and attraction blur, Gray and Seb can’t ignore the intense feelings drawing them together. But secrets and betrayals might prove deadly, unless Gray is willing to risk it all. And Seb must find the strength to make his own future and sing his own song…

Sebastian is deaf and enhanced. He doesn’t need to have any abilities to know that his life is threatened. His father wants his son safe, and he hired a private security team to ensure to it.
Gray is non-enhanced, ex-military and works for Rawling Security since he left the army. When he’s offered the job to protect a twenty year-old rich kid, at first Gray wasn’t thrilled. But he changed his mind as soon as his realized Seb’s deaf and his enhanced status. Gray feels his overprotectiveness instinct raised.
Seb and Gray will have to trust each other in order to erase any threat against them and allow Sebastian to be able to live his life fully and play his melody.

Guarding his Melody by Victoria Sue is book 4 in the Enhanced World series, and it’s a standalone.
As a huge fan of the Enhanced World series, I was more than thrilled, excited and also hyperventilating knowing that book 4 was coming out soon. When I heard that this book was a standalone in the series without my favorite guys, I was curious to read what the author had in her mind. Oooh man, let’s just say she perfectly knows what she’s doing.

Sebastian had been deaf since he was 3 years-old after having meningitis, then at twelve, he woke up with the mark on his cheek. The mark that said to the world that he’s enhanced, but Sebastien doesn’t seem to have any ability (Read the book if you want to know if he has or not any abilities). His father is obsessed with healing him, like Sebastian needs to be fixed, and he submits Seb to hard (and cruel) operations that make him really sick. Seb tries his best to protect himself and to feel safe in his home and in his body and playing music is his safe place. I completely melted for Seb, he’s fragile, and he isn’t. The author created this duality in him. Physically, because of his health and cruel treatment (there’s no other word) he’s weak and needs to be protected. But mentally, Seb is stronger than any of us and Gray. His stubbornness, his sensitivity, his creativity, and his strength won me over. I adored him.

Gray is ex-military, and he suffers from PTSD plus guilt from his past. He’s a good bodyguard but refuses to get attached to anyone except Seb. From the beginning, Gray is moved by Seb, he wants to help him and protect him. He really cares about him and only wants Seb’s happiness no matter what it costs for Gray. I adored Gray, he’s a good man, with good intentions, and although he can be blind and stubborn, he’s a fighter, a warrior, and he’s ready to do anything in his power no matter the consequences to help and protect Seb.
Seb and Gray need each other. If Gray protects Seb and helps him to be who he truly is, then Seb helps Gray to see what he missed in his life. Seb is deaf, yes, but he sees and hears the world with his mind and heart, while Gray was deaf and blind to his own heart before meeting Seb.

This book was beautiful, the writing was perfect and the plot intense and captivating. I couldn’t put it down until I finished and I wanted to cry at the end because I finished the book (never said I was rational). Seb and Gray play their own music, their own melody that only their bodies and hearts can hear. The book was like a music sheet, and their story a beautiful melody that we want to guard in our heart.
It’s a must-read. If you don’t know the Enhanced World series, no worries (even if I start to question your life choices! Yes, I judge you!) Like I said, Guarding His Melody is a standalone and when you get a taste of this universe, I know you’ll want to read the other books.

It’s 5 OptimuMM for Gray, Seb, and their melody.