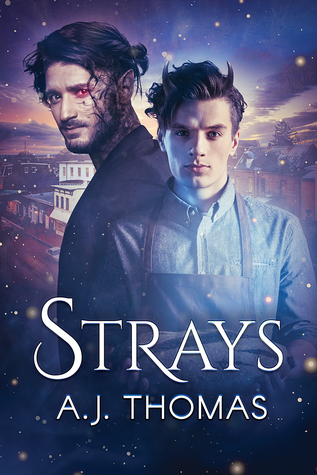 Orphaned at a young age and raised in the foster system, Jory Smith has no idea he’s half incubus. He only knows he has the power to heal people, making himself sick in the process. Exploited by a crooked faith healer who sells his abilities and his life to the highest bidder and then left for dead, Jory flees, falling into a job at a small-town café where he can put his lifelong obsession with baking to good use.
But the minister who exploited him wants him back.
Exiled hellhound-turned–bounty hunter Malpheus Pelle has no idea why his human client wants him to track down an incubus. Jory is traumatized and afraid to touch anyone, an emotional handicap that could prove fatal for a demon who requires physical contact. Needing answers, Mal concocts a disastrous plan: pretend to date Jory to uncover the truth. Unfortunately, his plan never included dealing with an ancient demon assassin, Jory’s orgasmic pumpkin cookies, or losing his heart to the incubus he’s supposed to be hunting….

Jory Smith is an orphan with a special gift. He can heal people when he touches them. He’s exploited by Adam, a preacher, who scams people in his church “New Ministry”. Jory tries his best to not hurt people or to be hurt in the process, until Adam ambushes Jory and almost had him killed by healing Eugene Barnett.

Malpheus Pelle is a demon, a hellhound, and lives as a bounty hunter. He’s called by Eugen and Adam to find Jory and bring him back. Mal knows exactly what Jory is, and doesn’t understand; why humans want an incubus.
Mal will track down the incubus, ready to be paid for his job, but when he meets Jory, nothing happens like he expected, and the last thing Mal wants is to give up Jory.

Strays by AJ Thomas was a great paranormal book that I really loved.
Jory doesn’t know what he really is. He’s sure he’s just a human with special abilities. When he meets Mal, he’s torn between running away from this dark, handsome man and trying to get know him. But nothing is simple for him. He’s hunted by Adam and Eugene who try to kill him, Neal, a homeless drunk who can appear and disappear; warns him to leave town because danger is around, and Mal wants to date him. Nothing is simple for him, and when Jory learns who and what he is, things get a little bit more complicated. I liked Jory, he’s kind, smart and funny. He’s not a little fragile thing, he has a lot of fight in him, and he’s not afraid to use it. I completely melted for him and his cookies (I probably gainned 10 pounds while reading the book).

Mal is a hellhound exiled on earth, with Louise, his pug who’s not really a pug but a hellhound too; He hunts the people who try to avoid jail. He’s surprised that two humans want him to track down an incubus, and let’s just say Mal has a lot of ideas about incubus, and not positive. He was completely surprised to meet Jory, he didn’t expect to fall in love with him and to have this visceral need to be with him. I so adored Mal, he’s funny, smart and most of all, super handsome with a beautiful sensitivity as an artist. He’s super-hot, and his interactions with Louise are super cute.

I really loved this book. AJ Thomas wrote a great story with a good plot. We learn a lot about the Demonic Kingdom, their rules, factions and all. It was well written and very well described. Not too much boring parts; and not too much information to be confusing, it was well done. Jory and Mal are hot; and loveable, and the secondary characters are very interesting especially Neal and Keygan. I hope there will be a sequel to this book.

I gladly recommend this book, I had a great time with it.

It’s 5 optimuMMs for the pastry chef and his giant puppy!