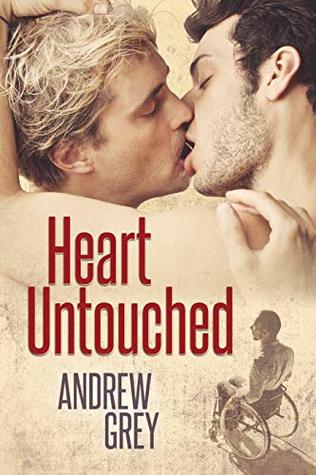 A Hearts Entwined Novel
An accident crushed Duncan’s Olympic dreams and landed him in a chair, but he knows it’s time to get his life back on track—and he has a plan in mind. Working with his friend Todd, an Olympic skeleton racer, on a promotional campaign will not only help Duncan regain some direction, but it’ll give Todd the financial boost he desperately needs. The sport Todd loves is draining his resources—so much so that he’s thinking of giving up racing just to make ends meet.
As the two men work together, their friendship blossoms into much more, and suddenly the future is looking brighter than it has in a long time. But just when love, happiness, and success seem within their grasp, the USOC steps in with plans to stop their campaign. That’ll mean an end not just to Duncan’s business, but to Todd’s dreams… and Duncan isn’t about to let that happen to the man who means everything to him.

Heart Untouched is the third book in the Hearts Entwined series by Andrew Grey. I greatly enjoyed the first two books in the series. I didn’t enjoy this book as much as the first two. I just couldn’t connect with the main characters as much. The writing was just as good as the first two, and it had a good storyline, but for whatever reason, I just didn’t like the characters as much. But it won’t keep me from reading the next book in the series which I’m hoping will be about Dean and Lee.

I liked Duncan, but he sometimes comes off as whiny, negative, and self-loathing. Not that he didn’t have every right to be when his Olympic dreams were crushed by a bad accident that left him in a wheelchair. He has to relearn how to do everything again, including being independent. He lost most of his friends after his accident. He does still have his friend Todd, who’s also an Olympic skeleton racer, and a couple of people that he made friends with during physical therapy. Since he can’t fulfill his dreams of being on the podium, he’s determined to help his friend Todd achieve his. When Todd mentions that the garage he works at is interested in an advertising/promotional campaign, it’s right up Duncan’s alley since he went to college for marketing and promotion. He has the brilliant idea to use Todd as the spokesperson for the garage chain. Not only will the campaign help Duncan regain some direction in his life, but it’ll hopefully give Todd the financial boost he desperately needs.

I liked Todd more than Duncan. He refused to give up on having a relationship with Duncan even when Duncan refused since he didn’t know if his equipment down south would ever regain its function. I loved when Todd said that loving somebody was more than just the physical side of things. I loved that he loved Duncan unconditionally. He also set up a couple of go-fund-me campaigns to help with expenses. I really enjoyed when the book was in his POV. He was such a patient, sweet, kind, and generous person, which was definitely needed as Duncan needed lots of reassurance.

I also loved how supportive everybody was when they ran into opposition during the campaign. I also like getting to see the other characters from the first two books and how they were doing. I’m hoping to see more of Todd and Duncan in future books as well.