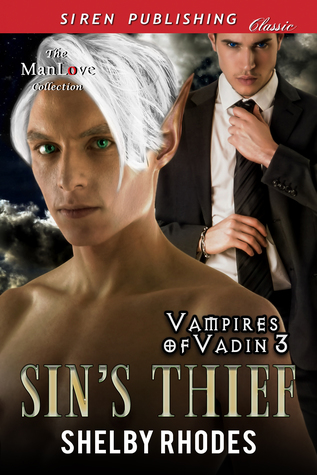 [Siren Classic ManLove: Alternative, Fantasy, Paranormal Romance, MM, shape-shifter, vampires, HEA]
Fouled mouthed, snarky and overly pessimistic, Cecil Baxter’s rules for life are to trust no one and to never become attached. Since birth, his life has been one pitfall after another. But when freedom was a fingertip away, Sin, a sophisticated man with a vocabulary to match, jumped in his path. Thrown into a world he doesn’t understand, Cecil finds himself breaking all his rules just for a chance to be with Sin.
Sin Draven, leader of the Draven Zaytari, knows he has quirks. Many would see him as an overly calm, civilized individual. However, people often forget that almost everyone has darkness inside them and Sin is no exception. When approached by a hurt young man his honor demanded he help, thief or not. That instance leads to Sin finding the one thing he has always wanted—a home.
When outside forces, misunderstandings, and inner turmoil pulls them apart, they must fight their fears before all is lost.
Trigger warning: Book touches on topics such as self-harm, suicide, and depression.

Sin’s Thief is the third book in the Vampires of Vadin series by Shelby Rhodes. This is a standalone book. You don’t need to read the other two books in the series to enjoy this book. I know that having read this book that I will be reading the other two books in the series to find out more about the king and his consort and the other sub characters that were in this book. This is the first book that I’ve read by this author, but it won’t be the last. I loved the storyline and all of the feels. The author has a wonderful way with words, and I loved the story building. The characters were developed, and lovable, and sexy. There is a scene of self-harm, and verbal and physical abuse from a parent to a son. If these are triggers for you, then I would probably pass on the book. The author handled the issues very well and had me ugly crying at one point in the book but then there were points where I was laughing and saying awe.

I loved Cecil. He’s an Arcadian, and he’s had a hard life growing up with an alcoholic father that’s verbally and physically abusive. He tries to stay out of the house for long periods of time and uses hustling to make money, by luring in men and then stealing from them without putting out. When he gets a severe beating and the promise of a special present from his dad in the form of being passed around to his dad’s friends for his eighteenth birthday, Cecil knows that it’s time to get out and never come back. However, his injuries are more severe than he thought and the person he ends up hustling turns out helping him when he passes out by getting him medical help and then giving him a place to live. But Cecil has a bunch of issues that he has to work through, and I loved how supportive Sin tried to be. I also loved the drone Cecil makes using his blood that’s called Drop and how Drop is his only friend until Sin starts to introduce him to the other people that live in the house and are a part of the group. I loved Benji and Roth and the other members of the Bellfall branch. Although I think almost everybody at the Dusburn branch should die for the pain that they put Cecil through.

I also loved Sin. He’s the head of the Draven Zaytari group. He’s a vampire, and if I remember correctly, he’s about 6,000 years old. He also has a secret that only a few people know about. Something that he has no control over when it happens. And that’s part of the reason he feels that Cecil would be safer without him. But is Cecil better without him? You’re going to have to read the book to find out but be prepared for a cliffhanger ending that will leave you needing the next book to find out what happens next. I can’t wait until it comes out so that I can devour it.