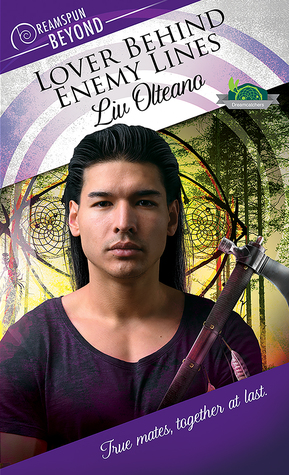 True mates, together at last.
Claw—fearless leader of Seattle’s Team 32—has faced many dangers during more than a century and a half as a dreamcatcher. Yet nothing has ever scared him more than his obsession with Nathan Gallagher. Tormented by visions and dreams about the man ever since he first laid eyes on him, Claw now has to deal with living under the same roof with the object of his most ardent desires. And Nathan is so much more than a simple crush.
Brother of the caster who’s been plaguing Team 32’s area and less-than-willing houseguest of the team after a strange break-in attempt, Nathan may hold the key to finally apprehending his sister and putting a stop to the havoc she’s wreaking on Queen Anne…. Meanwhile, Nathan’s wreaking some havoc of his own on Claw’s heart

I liked the internal struggle that Claw goes through trying to figure out to do about Nathan. Whether or not he was his mate and if he was his first love reincarnated and if Nathan was going to side with his sister and Claw was going to follow his mate and betray his fellow dreamcatchers. But luckily Nathan is afraid of the person that his sister has become and breaks into the dreamcatchers’ house after witnessing an altercation between his sister and some of the dreamcatchers. Nathan decides to follow the guys back to their house to see if they can help him, but instead, he finds himself their captive. With the use of a spell that can show whether Claw or Nathan are lying when asked a question, they start to build a relationship based on trust and lots of chemistry.

I liked Nathan. He is the complete opposite of what other witches are like. He isn’t obsessed with gathering power or what his status is in the coven. He misses his sister who disappeared a while ago, and he’s been searching for her ever since. His sister, as a baby, had powerful powers and could siphon the energy from the people around her. Usually, such children are killed or put with a non-magical family to be raised. But his sister ran away from the family she was placed with and has become obsessed with gaining as much power as possible. It has corrupted her. And Nathan is desperate to find somebody to stop her before she can kill somebody. He didn’t expect the powerful attraction that he feels for the leader of the dreamcatchers or how much they would distrust him.

I really liked the ending of the book, and I can’t wait for the next book to come out.