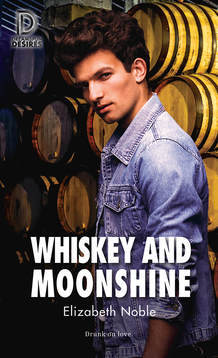 Drunk on love.
Like a well-aged whiskey, master distiller and old-money entrepreneur Malone Kensington is elegant and refined. Unfortunately he’s also a perfectionist who is more dedicated to the success of his generations-old company than his own love life.
That company needs a public spokesman.
What Colton Hale lacks in sophistication, he more than makes up for with the charisma that’s allowed him to survive on the street from a young age and charm his way into the lucrative—if overwhelming—public position at the Kensington Distillery. When Mal takes Colt under his wing, hoping to polish off his rough edges, opposites attract and a passionate romance blossoms despite the differences in age and background. But can it survive a Kensington Board of Directors who believe Colt is nothing but a gold digger and a kidnapper determined to profit from the love of Mal’s life—dead or alive?

Malone Kensington is the owner of the Kensington Distillery and Still House. He runs his company with passion, he loves brewing his whiskey, but he’s very bad at socializing with any other human being.

Colton Hale has been on the street since he was 15 years old after his parents kicked him out for being gay. He survived as much as he could, until his last beating. Colton leaves Toledo with the hope to start over somewhere else. When he has the opportunity to become the spokesman to Kensington Distillery, Colt doesn’t back down and works hard to achieve his goal.

Malone will take Colton under his wing, helping him to become who he really wants, but the attraction between them is beyond a simple friendship. Mal and Colt will have to face the prejudice of their past, their fears, and all their difference to be together.
Whiskey and Moonshine by Elizabeth Noble was a sweet read that I enjoyed a lot.

Malone isn’t the typical “asshole” boss. He often referred himself like that, but I thought he was kind, gentle and protective of the people he loves. He’s funny and smart, and I love how he is with Colt, how he respects his boundaries and how he takes care of him. I completely melted for Malone.

Colton is adorable, strong, and brave. After what he’s been through, he still works hard to have a good and honest life. He is honest, I really loved it about him, and he doesn’t hide his past, what he had to do in order to survive on the street. He’s fresh and kind of naïve, but not so naïve either. I loved him, I loved his honesty, his kindness, and his strength.

The book and the plot were good, simple, well-constructed and easy to follow. The characters were adorable, and it was easy to bond with them and most of all to love them. I also love the writing, the author gave us a lot of details and description in the book, but it wasn’t boring or too long. I really enjoyed it. It was well described, and the author must have done a lot of researching before. I appreciated that.

It’s 4 OptimuMM for Mal, Colt, and their Moonshine.